Samsung has received the ISO 26262 Certification from TUV Rheinland for functional safety in its product development process for automotive semiconductors.
Written by Cho Mu-Hyun, Contributor on May 12, 2019 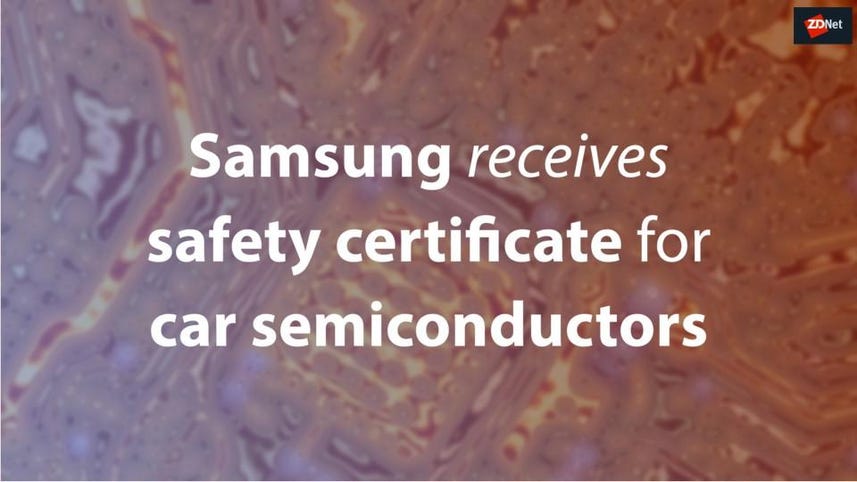 Samsung Electronics has received certification for functional safety from a globally renowned testing firm for its automotive semiconductors, the company has announced.

The ISO 26262 for automotive functional safety was established as a global standard by the ISO in 2011 to minimize the risk of electric or electronic system malfunction in vehicles. The standard was revised in 2018 to add guidelines for advanced driving assistance systems and autonomous driving.

The accreditation ensures that Samsung's semiconductor offerings are able to satisfy safety standards for cars throughout its product development process.

Samsung formed its automotive solution group back in 2015 to sell components to car makers.

In 2017, it acquired US auto-component giant Harman for $8 billion to expand the business and offer further solutions.

Samsung introduced new processors and image sensors in October last year, with the new offerings aimed at providing automotive applications. In January, the company also announced that its Exynos Auto V9, which has eight A76 cores, will power Audi's next-generation in-vehicle infotainment system. Last month, Samsung announced that it was investing 133 trillion won into logic chips in the next ten years to become global top in the industry.

The South Korean tech giant is already supplying its memory solutions such as DRAM and NAND to car makers such as compatriot Hyundai.

Samsung has launched 64MP and 48MP image sensors, which will power flagship smartphones launching in the second half of the year.

The Internet of Things processor is optimised for data communications shorter than 100 metres, Samsung said.

Galaxy Fold: The issues and the 'fix' (TechRepublic)

ZDNet's Adrian Kingsley-Hughes sits down with TechRepublic's Karen Roby to talk about all of the issues with the latest Galaxy foldable phone and what Samsung is doing to solve these problems.

TVs
A business tried to use a 50% price hike as a recruitment tool. It didn't go well