Samsung is, in many ways, way ahead of the curve with its Series 5 Chromebook. Although it looks like a standard small-format notebook, there's not a lot going on under the hood.
Written by First Take , Previews blog log-in on July 26, 2011

Samsung is, in many ways, way ahead of the curve with its Series 5 Chromebook. Although it looks like a standard small-format notebook, there's not a lot going on under the hood. Without an internet connection, the Chromebook is pretty much redundant. And that's its big downfall.

The hardware is attractive, with a white plastic outer chassis, well-designed inner keys and a good quality, 12.1in. 1,280-by-800-pixel display. The screen lacks a glossy coating, which makes it relatively easy to view outdoors. Viewing angles are fine, particularly in the horizontal plane. 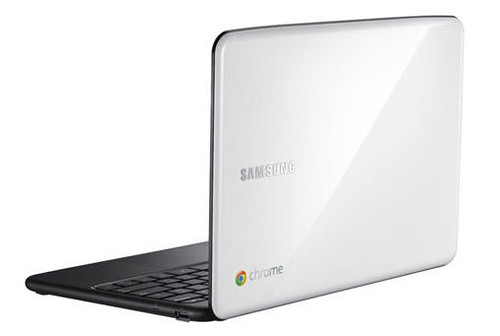 The keyboard is good enough for extended periods of typing, although it does seem bare lacking a Fn key row and embedded characters. A row of shortcuts above the number row meets most needs, with some unusual things like a reload key and back and forward keys that are ideal for web browsing.

One of the real plus points is battery life. Samsung says you’ll get 8.5 hours of life from a charge. we used the Chromebook on and off over a period of five days for an hour or so at a stretch, and didn't have to recharge once.

Another great plus is that the Chromebook is almost instant-on. We found it took way under 10 seconds to boot, and resumed almost in the blink of an eye. It's got that iPad-like allure in this respect, and a simple sign-in to your Google account all that's needed to be up and running in just a couple of seconds. 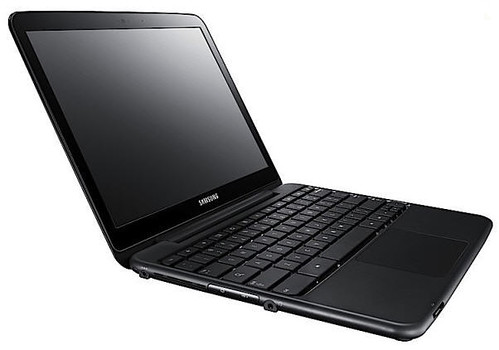 There are two USB ports, a headphone connector and a tiny external monitor connector that requires a non-standard cable. An Intel Atom N570 provides the processing power, backed up by 2GB of RAM.

We'd have liked HDMI for screen sharing, a way of printing and Ethernet as an alternative way of getting online in addition to Wi-Fi and mobile broadband. The latter isn't standard, with both SIM-equipped and Wi-Fi-only versions available for £399 and the £349 (inc. VAT) respectively. Three is the UK broadband partner, but the Chromebook is also currently available from Amazon as Wi-Fi-only with the 3G version due on 1 August (the pricing is the same as Three's).

There's 16GB of internal storage. This seems very low, but the whole idea of the Chromebook is that you work entirely online with little saved locally, so it may well be enough.

All this sounds encouraging, but in everyday use we regularly found ourselves hankering for a 'real' computer. Our working environment is not fully shifted online — far from it in fact — and we found we needed to use our main PC quite often.

There's also the Google Chrome factor. Chrome is the only browser in town here, so if you don't like the way Chrome works, or want something it doesn't support, you're stuck.

In general use, for entertainment purposes such as streaming video, the Chromebook struggled as more and more tabs were opened; we found it sensible to keep fewer than eight alive at any one time.

We were a little disappointed with the speaker quality too. The top volume was rather low, and the quality was on the tinny side. Writing using Google Docs went more smoothly so long as we stayed online. We couldn't find a way to copy downloaded Google Docs from internal memory to a USB stick for sharing.

You can open files from a USB stick and from SD cards, but the range is limited to a few image and video formats. Not even RTF files are supported, although PDFs are.

In the end, the main problem with the Samsung Chromebook is its reliance on being online. With smartphones and every other notebook and tablet format able to combine online and offline activity, the Chromebook seems too far down a one-way street — particularly as it's competing directly with tablets, netbooks and low-cost notebooks on price.