Samsung has taken the wraps off its new high-end 4.7-inch display Galaxy Alpha, the device at the centre of a raft of rumours in recent weeks due to its full metal frame.

Samsung has unveiled the Galaxy Alpha, the first in a series of new Galaxy devices that showcase the Korean company's "new design approach" to Galaxy, which departs from the signature shiny, rounded frame.

According to Samsung's mobile chief, JK Shin, the Alpha was designed give consumer what they want, which apparently is a sleeker looking device than past Galaxy phones with specs that sit somewhere between the Galaxy S5 and S5 mini. 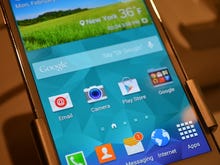 "With an entirely new appearance, the Galaxy Alpha focuses on both beauty and functionality combining a stunning metal frame and slim, light weight design with the same powerful hardware and features users expect from a flagship Galaxy mobile device," said Shin.

Images of the Alpha leaked ahead of today's launch, and drew comparisons between it and Apple's iPhone 5S due to their shared bevel-edged frame. Despite some similarities, the Alpha still looks very much like other members of the Galaxy family, carrying on the S5's perforated backplate, and oval hard home button.

Samsung is expected to be bring the same design to the forthcoming Note 4.

Like the slightly smaller S5 mini, the Alpha has a Super AMOLED display at 1280 x 720, but instead of one quad-core processor, is equipped with an 'octacore' (consisting of a 1.8 GHz and a 1.3GHz quad-core processor). It also comes with a 12-megapixel main camera and 2.1-megapixel secondary camera.

Other specs include 4K video capture, 2GB RAM and 32GB internal storage. Unlike many of its devices, Samsung has ditched the microSD slot. The Alpha comes with a 1,860mAh capacity battery, which is less than the smaller S5 mini's 2000mAh battery .

Some of the software features packed into the Alpha include Samsung's Ultra Power Savings Mode, which limits the screen to black and white and winds down background processes, and helps extend battery life. Other features include Samsung's S Health, fingerprint scanner, file-hiding Private Mode and integration with its wearables, including the Samsung Gear Fit, Gear Live, and Gear 2 wearables.

Samsung expects to make the device available in September but hasn't announced prices or markets yet. The device will be available in black, white, gold, silver and blue.