Samsung Electronics has cut the ribbon to its new chip plant in Xi'an, China, which spans 230,000 square meters and cost US$7 billion to build. 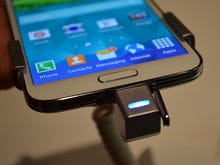 Operating since Friday, the facility produces 10-nanometer NAND flash memory chips and is estimated to generate annual sales of 60 billion yuan (US$9.74 billion) at full capacity, reported China Daily. The plant is located in the Xi'an high-tech development zone in China's Shaanxi province.

Samsung has further plans to build a semiconductor packaging and testing facility by year-end to complete the production chain. With the new Chinese facility now operational, the Korean smartphone maker now has three main production geographies, including two plants in South Korea for systems and storage processors, and one in the U.S. for systems semiconductors.

Construction on the Xi'an site had commenced in September 2012, and is the largest single foreign-invested project in China to date, with the US$7 billion investment comprising only the first phase.

The Chinese city was selected for its robust investment and services environment, and its network of researchers and skilled workforce with more than 100 research facilities and universities.

Samsung currently has some 1,300 local university graduates working at the Xi'an site, which is the company's biggest electronics production base.