Even though satellite signals are vulnerable to spoofing attacks from hackers, the world's newest global navigation system, Europe's Galileo, has been operating with no way to protect civilian users from hacking attempts since its launch in December.

But it is Galileo's newness that has led researchers at the University of Leuven in Belgium to equip Galileo with what is believed to be the first digital security measure for a global navigation system for non-military use.

Forced to work within the limits of Galileo's low-bandwidth signals, the researchers needed to find a security protocol that used relatively few bits. Eventually, they devised a method for applying an electronic signature onto each of the civilian satellite signals in the Galileo constellation. 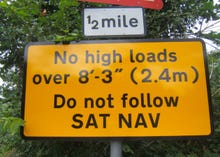 Using a satnav switches off part of your brain Perhaps that explains why some users end up in rivers or driving through churches.

The team chose a protocol called the TESLA signature, which has never before been used in a real-life application. Compared with one of the most well-known digital security protocols, RSA encryption, TESLA signatures are relatively economical. On Galileo, Tesla uses 200 bits, while RSA keys can use anywhere from 2,000 to 4,000 bits.

TESLA lets the receiver check the integrity and origin of each packet in a multicast or broadcast data stream.

"We could have used larger signatures, but then you would have had to cut them into parts," says Vincent Rijmen, professor of electrical engineering at the University of Leuven, and one of the members of the research team.

"The disadvantage is that you cannot authenticate everything or you have to wait longer until you can verify them."

Rijmen tells ZDNet that Galileo's new electronic signature is designed to be authenticated every five seconds, which can accommodate the high speeds at which aircraft travel.

Galileo will be the TESLA signature's first application.

Concern over the vulnerability of global navigation satellite signals has grown over the past decade. Advances in hardware equipment have made telecoms equipment relatively cheap and accessible to hackers.

And as air and ground travel become more dependent on automation and as driverless technology gathers pace, transportation companies and their customers will increasingly demand reliable global navigation data.

Hackers are likely to use spoofing attacks to aid drug-trafficking or cargo-theft missions. But tampering with navigation satellite signals could also hurt any private citizen. An inaccurate position and timestamp could send a vehicle off course or damage a search-and-rescue mission.

The most well-known and widely used global navigation satellite system, the US's Global Positioning System (GPS), does not have a signal-authentication feature for civilian use. Meanwhile, experts there say concern over spoofing attacks on GPS is growing.

Despite such concerns, Galileo will not deploy the TESLA signatures to the public until 2018 because the signatures' dedicated receivers are still in development. And until Galileo deploys all its satellites by 2020, the authentication system will operate in test mode.

More satellites will join the Galileo constellation this year, with satellites 14 through 18 now undergoing testing in orbit. Galileo will be fully operational in 2020 with a total 24 satellites, all of which will offer TESLA signature authentication for civilian use.

Join Discussion for: Satnav spoofing attacks: Why these researchers...