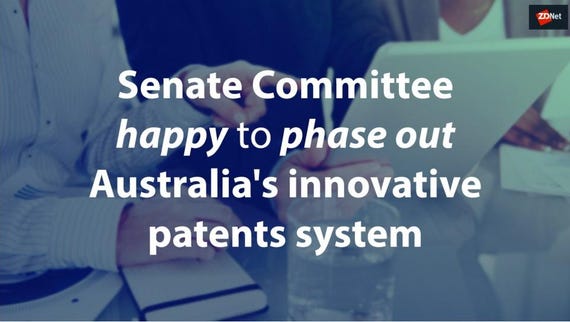 The Senate Legislation Committee was charged with probing Australia's intellectual property (IP) law reforms, which were drafted in response to the country's microeconomic think-tank coming to the conclusion that Australia had "lost its way in IP policy".

After hearing concerns over the adequacy of Australia's patent system, the committee released a report [PDF] making the sole recommendation that the Intellectual Property Laws Amendment (Productivity Commission Response Part 2 and Other Measures) Bill 2019 be passed.

The Bill was initially drafted in response to a 2016 report [PDF] by the Productivity Commission that commented on the state of Australia's IP landscape, and seeks to propose amendments that address two of the report's 25 recommendations.

One of the two addressed recommendations was for the innovation patent system (IPS) to be phased out, as it was used sparingly and encouraged low-value patents, such as a pizza box that turns into a bib.

Many organisations in their submissions to the inquiry raised that the phasing out of the IPS would negatively impact small to medium-sized enterprises, saying that research and development are often characterised by incremental, small steps that are still commercially significant for the companies concerned.

"The substantial investment which we make into research and development and smart manufacturing in Australia is underpinned by the present patent system. Innovation is not necessarily ground breaking. We develop smart products that are better than our competitors and more user friendly for our customers," UNSW Knowledge Exchange said in its submission to the inquiry.

IP Australia, meanwhile, said the IPS does not benefit most Australian businesses and limits research, development, and innovation in Australia.

Since the introduction of innovation patents in Australia in 2001, which are meant to boost the innovation in small and medium-sized businesses, less than 5,000 have been awarded to the scheme's targets, the agency said last year.

"Evidence to the inquiry suggested companies currently pursuing innovation patents would not find securing a standard patent significantly more difficult on account of the low inventive step requirements of the standard patent," the committee said.

In the absence of the IPS, the committee said a dedicated small business support service should be created to provide education and training, improved navigability, reduced fees, a truncated patent assessment process, and access to simplified dispute mechanisms for small to medium-sized enterprises.

The second recommendation that the Bill addresses from the Productivity Commission's 2016 report is the introduction of an objects clause for the Patents Act, which the government noted would provide more targeted assistance to stimulate innovation in Australia.

"The object of this Act is to provide a patent system in Australia that promotes economic wellbeing through technological innovation and the transfer and dissemination of technology. In doing so, the patent system balances over time the interests of producers, owners and users of technology and the public," the Bill's object clause, which would provide the purpose of the entire Patents Act, says.

In making its decision about the objects clause, the committee sought out IP Australia's advice, which had submitted the term "technological innovation" was consistent with the terms in which IP is discussed internationally.

Taking this into consideration, the committee was of the view that an object clause would "provide a valuable statement of the overarching framework for the patent system to guide decision makers and the community".

This is despite many organisations, in their submissions to the inquiry, opposing the introduction of an objects clause. The arguments raised against introducing an objects clause stated that terms such as "technological innovation" and "economic wellbeing" would limit what could be patented and create uncertainty and complexity to IP law.

After digitising most of its back end, the patent office is onto the next phase of its digital transformation journey.

Most small businesses were not getting value from innovation patents: IP Australia

IP Australia will be unlikely to shed tears when innovation patents disappear.

By joining the Open Invention Network, Microsoft is offering its entire patent portfolio to all of the open-source patent consortium's members.