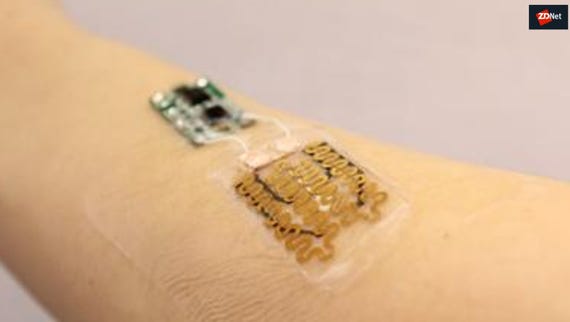 If you were to compare the medicine of ancient Greece with healthcare today, you could name plenty of differences: vaccinations, empirically-tested medicines, and we don't think that an imbalance of humours is the root of most illnesses. But look closer, and you'll see that some things haven't changed despite all the centuries that separate us.

Bandages, for example. If you found yourself on the receiving end of a Spartan soldier's spear in ancient Greece, you'd have a strip of cloth wrapped around your wound. Find yourself with a chronic wound today and, chances are, you'll get very similar treatment. The principle of the bandage -- a barrier that stops dust, dirt and other environmental nasties from getting into a wound -- has remained the same for somewhere over 2,500 years.

Finally, however, the bandage is getting its own high-tech makeover.

Researchers at Massachusetts' Tufts University have been working on a prototype smart bandage that can not only keep track of how well a wound is healing, but also deliver drugs directly into the site of the injury only when they're needed.

The bandage is the culmination of over six years' work between Tufts and other higher education institutions to create a bandage that includes sensors to monitor a number of markers showing that show how well, or otherwise, a wound is healing, alongside a drug delivery mechanism - all in a form factor that's flexible enough to be wrapped around a wound.

"Chronic wounds are a very biologically complex system, and you have to have the bandage interface in very close contact with the wound so you can monitor whether the wound is healing. At the same time, we wanted to find out if there was a way to intervene at the right time to accelerate wound healing," Sameer Sonkusale, professor of electrical and computer engineering at Tufts University's School of Engineering, told ZDNet.

The bandage is a combination of a cloth layer and an electronics layer. The electronics layer includes sensors that track the pH and temperature of the wound -- a higher than normal pH or temperature indicates it's not healing well. Oxygenation sensors could also be used within the bandage -- oxygenation levels can be used to track a wound through its various stages of healing, with lower levels suggesting impaired recovery.

The Tufts engineers have designed the bandage to be a closed loop. Once it detects slow wound healing or signs of inflammation or infection, it can drop drugs into the wound by means of a thermoresponsive system: a microprocessor within the bandage monitors pH and temperature levels and, if they go too high, a drug-carrying gel within the bandage is heated up. The warmed-up particles containing the drug shrink, releasing their medication into the wound.

"I like to call it precision diagnostics -- you're not providing the same drug treatment regimen to every person, because every person is different and their wound healing may respond differently to different drugs. It's important we monitor how the wound is healing and only then deliver drugs on demand," Sonkusale said.

Monitoring of the wound doesn't just stay within the bandage -- data can potentially be sent out to a phone, either to keep the patient or doctor informed, or to a clinical application, where aggregated data could be used for research purposes to help refine treatment algorithms. "There is definitely value in gathering the data from all kinds of wounds and hopefully that will improve chronic wound treatment in the future. There's definitely the potential for that when we have all types of wound fitted up with these kinds of smart bandages," Sonkusale said.

The bandage is 3mm thick, and as its electronics components are almost all flexible, enabling it to be wrapped around the site of injury just as a normal cloth bandage would.

The bandage "required a bit of engineering from the ground up, because most of the time, sensors or drug delivery systems are in some way tied to a hard substrate, like a capsule or a syringe, or a silicon or glass substrate... When we designed these platforms we were mindful of the fact that anything that is in contact with the wound should be really flexible and biocompatible with the wound," Sonkusale said. The microprocessor, which is not yet flexible, sits to one side of the wound so as not to disturb it. However, once a flexible version of the microprocessor has been developed, it can be more fully incorporated into the bandage.

To keep potential costs down, the cloth and electronics layers can be pulled apart; the former can be disposed of, the latter reused.

While the bandage potentially has applications across all types of wounds -- from acute burns to bed sores -- there are certain categories where the bandage may be particularly useful.

Take diabetes, for example: apart from trauma such as accidents, the condition is the commonest cause of an amputated limb. Diabetes causes what's known as peripheral neuropathy, where the nerves to the limbs die off. Without full sensation in their extremities, for example, a diabetic may injure their foot and be unaware of the wound. Eventually that injury can develop into an ulcer, and if it doesn't close properly, it can become infected, gangrenous and potentially the foot may need to be amputated.

"If you can have a smart bandage that keeps the wound in the optimum condition by delivering for example antibiotics or antimicrobials or even oxygen, the chances of having the wound getting infected and amputation is much, much lower," Sonkusale said.

Having lab-tested the bandages using tissue culture, the Tufts engineers are now looking to begin clinical trials and find partners that could help take the smart bandage to commercialisation. Sonkusale believes bandages with monitoring capabilities alone could be available within one to two years, while monitoring-and-treating versions could be in use five to eight years from now.

Researchers across the world are also working on various types of smart bandages: a team from the University of Nebraska-Lincoln, Harvard Medical School, and MIT have developed a bandage that delivers drugs such as antibiotics when fibres inside are heated, while Swansea University is looking to harness a combination of nanotech and 5G networks for smart bandages that monitor wound healing.

Researchers at Purdue University are developing chips that could help scientists understand nerve conditions, and potentially help lay the foundations for neuroprosthetics.

Join Discussion for: This smart bandage can help diagnose and...