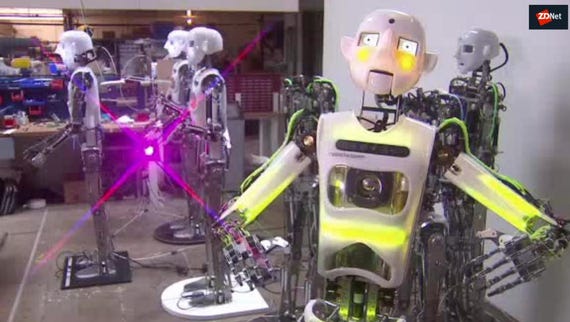 The creator of a sex robot says his doll was trashed by men at an electronics festival in Austria.

It's a headline that probably elicits disgust, or maybe a few chuckles. But the report is compelling because of the uncomfortable issues it surfaces. This is a class of technology that will soon be commonplace, and many aren't quite sure how to feel about it.

The incident happened at the Arts Electronica Festival in Linz, Austria. Sergi Santos, an engineer from Barcelona, Spain, was showing off a robotic doll he calls Samantha. The interactive robot is reportedly programmed to respond to "romance."

But instead of offering some engaging conversation and a bit of spark, Santos says that men at the festival treated Samantha like, well, an object.

"The people mounted Samantha's breasts, her legs, and arms. Two fingers were broken. She was heavily soiled," he told Britain's Metro. "People can be bad. Because they did not understand the technology and did not have to pay for it, they treated the doll like barbarians."

Samantha, which sells for about $4,000 per unit, is one of a number of new interactive sex robots whose creators boast they've brought artificial intelligence to creations that far-surpass more traditional sex dolls.

"The obvious next step in Realdoll evolution [sic] is integrating movement with the addition of robotic components," according to the company's site.

For critics of the technology, the incident in Austria is proof that these robots, which have uniformly unrealistic physical characteristics, encourage objectification and permit the expression of abhorrent behavior and violence toward women.

Laura Bates set up the ethical and societal quandary well with a compelling lead paragraph in a recent New York Times Op-Ed:

"Frigid Farrah. That's the imaginatively alliterative name of the sex robot that's yours to rape for just $9,995. Or rather, that's the name of the "personality" you would set your Roxxxy TrueCompanion robot to if you wanted to find her not too "appreciative" when you "touched her in a private area," according to the company's website.

The Foundation for Responsible Robotics (FRR) recently concluded that sex robots are on the way, and the market is decidedly male-driven. In a survey, roughly two-thirds of men said they were in favor of using sex robots while roughly the same percentage of women were against it.

The FRR report addresses a common argument in favor of sex robots, which is that they may reduce sex crimes.

"There have been controversial suggestions about the use of sex robots in sex therapy for the prevention of sex crimes such as violent assault, rape, and paedophilia."

The report finds that the issue is highly controversial and largely unstudied, but that the claims are extremely dangerous to entertain:

When we look at the question of whether or not sex robots could help to prevent sex crimes, there is major disagreement. On one side there are those who believe that expressing disordered or criminal sexual desires with a sex robot would satiate them to the point where they would not have the desire to harm fellow humans. On the other side, many others believe that this would be an indulgence that could encourage and reinforce illicit sexual practices. This may work for a few but it is a very dangerous path to tread.

It's hard to find psychologists who favor using sex robots to sublimate unhealthy or socially harmful behavior. Peter Fagan, a paraphilia researcher from Johns Hopkins, does not believe there will ever be a therapeutic use for sex robots, suggesting that such contact will have a "reenforcing effect" on behavior that leads to sex crimes like sexual assault and pedophilia.

Of course, not everyone interested in sex robots is a potential offender. Proponents argue that the technology is a natural evolution from sex toys, which are sold freely in open societies. But that notion is complicated by the idea of sex robots built to resemble children, for example, or those that simulate resistance.

For its part, the Linz Arts Electronica Festival denies that Samantha was sexually assaulted at its event.

I'd be interested in hearing from readers on this subject. (And this goes without saying, but I'll say it: Please respond with the intelligence, thoughtfulness, and mutual respect the subject demands and that ZDNet readers are accustomed to.)

Elon Musk is aiming to have cargo missions to Mars by 2022, and flights with crew two years later.