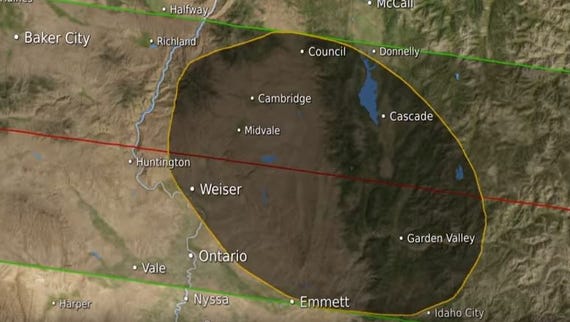 Watch the solar eclipse of the century: When, where, and how The total solar eclipse on August 21 will be the first time in 99 years that one will traverse the US from coast to coast. But, it can also be dangerous to view. Here's how to watch safely.

On Monday, August 21, 2017, the entirety of North America will bear witness to an eclipse of the sun, with the path of totality stretching across the country, from Oregon on the west coast to South Carolina on the east.

Let's take a look at some of the key eclipse facts.

See also: The solar eclipse: There's an app for that

This is the first total solar eclipse visible in the contiguous United States (excluding Alaska and Hawaii) for 38 years, the last one being back in February 26, 1979.

That year saw the release of the first spreadsheet program called VisiCalc, and was also the year that the first draft of the programming language Ada was released.

And while the worldwide web as we know it today didn't exist back in 1979, online services such as MicroNet and Bulletin Board Services (BBSs) were available to those brave pioneers and the hardcore technorati.

The last time a total solar eclipse was visible from coast to coast was almost 100 years ago, on June 8, 1918, the same year that the crystal oscillator, the cornerstone of digital watches and many other digital circuits that we rely on today, was patented by Alexander M. Nicholson at Bell Telephone Laboratories.

The eclipse will begin on the west coast at around 9.00AM PDT, with totality starting at 10.15AM PDT on the Oregon coast, between Lincoln City and Newport.

The shadow of the moon on the surface of the earth will be approximately 70 miles wide, and race across at a speed of 1,400 miles per hour, around twice the speed of Elon Musk's proposed Hyperloop One transport system.

On the east coast, the eclipse begins at around 1.15PM EDT, with totality beginning at approximately 2.41PM EDT before heading off out to the Atlantic Ocean.

NASA has produced data on when the eclipse begins and ends for a number of states to help people plan their viewing:

Two of these states - North Carolina and Georgia (second and eighth respectively) - are in the top 10 for solar power production. In North Carolina, some 371,000 homes get their power from solar energy, and because output is expected to drop from 2.5 gigawatts to 0.2 gigawatts for 90 minutes around the time of the eclipse, operators are readying gas plants to step in to take up the load.

North Carolina is home to a massive Apple data center which is home to the computing infrastructure for services like iTunes, Siri, Maps, and App Store, and that data center - along with all the others that Apple owns - gets 100 percent of its power from a combination of purchased renewable energy and on-site generation.

GIS analysis by veteran eclipse chaser Michael Zeiler suggests that between 1.8 and 7.4 million people will travel to the path of totality. Seems like a big crowd (and it is), but it's dwarfed by the monthly users for the big sites of the web:

The longest duration of totality will be 2 minutes 41 seconds (in Kentucky). In that time Apple will sell around 900 iPhones and around 200 iPads, and Google will handle around ten million searches.

Over that period of time on a typical day you'd expect:

However, given the special nature of the eclipse, we can realistically expect these numbers to be higher.

And when it comes to productivity, the eclipse isn't a good thing. A report by executive coaching firm Challenger, Gray, & Christmas, Inc., suggests that the solar eclipse could cost employers around $694 million, with states and metro areas falling directly into the path of the eclipse taking the biggest hit at around $200 million in lost productivity.

Whether you travel to see the eclipse in person (I did for the eclipse of 1999 in the UK, and it was well worth it) or you decide to stay at home and gather around a nearby TV or computer screen to watch it, I hope you have a great time.

Join Discussion for: Solar eclipse 2017: By the numbers