The general rule of thumb for smartphones is that they need to have a large screen. A diagonal corner-to-corner measurement of three inches is probably a good ballpark for the kind of screen that will deliver workable web browsing.

You can get away with smaller screens for mobile email, and there are always exceptions to the rule (take the perennially successful BlackBerry Pearl series from RIM, for example), but if you look at the general trend in smarthones large screens predominate.

So, what Sony Ericsson was thinking of with its pair of Xperia X10 mini devices is unclear — on paper. There are two versions of this Android smartphone, one with a slide-out keyboard called the Xperia X10 mini pro, the other lacking both keyboard and the 'pro' moniker. 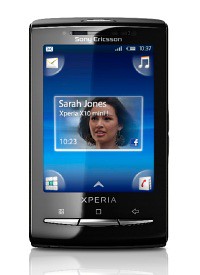 Bu after a short period of testing we were won over.

Quite clearly the screen is not appropriate for web browsing. Yes, you can access the web if you wish, either via 3G or Wi-Fi. But with a screen measuring 2.55in. across the diagonal corners and offering 240 by 320 pixels, it simply isn't up to the job.

Nor is it much good for entering text. Sony Ericsson doesn't bother to offer a wide-screen keyboard, and all you get is a T9-style system with the screen in portrait mode. Horizontal flicks move you between separate screens for non-QWERTY characters and for smileys. It's usable, but you won't want to write long emails on it.

The use of Android 1.6 will irk those who want the most recent edition of the operating system in their device, but the Android Market does provide access to a host of add-on applications.

And there the bad news ends. The small physical size is its real boon as the handset easily fits almost any pocket. And many of the features, from making calls to playing the odd game, work surprisingly well on the small, responsive screen.

Sony Ericsson has come up with a system called Corner Control to help you get around applications. This boils down to having four shortcuts in the corners of the main screen, and you can define the apps that live here. There are multiple main screens — one for every widget you want to add. We stopped adding after eleven widgets.

There is GPS, a 5-megapixel camera with LED flash and an FM radio. And because the screen is small, the battery life is quite good. We are impressed enough to be pretty keen to try the keyboard-equipped Xperia X10 mini pro. Stand by for a full review of that device shortly.