While smaller Windows tablets seem to be going downmarket these days, Sony continues to churn out premium Android models. It's just announced the tablet companion to its new flagship Xperia Z3 smartphone in the form of the Xperia Z3 Tablet Compact. 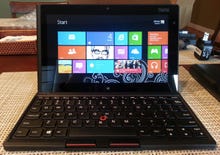 As its name suggests, the Z3 Tablet Compact runs on the smaller side, with a 8-inch display and a thickness (6.4mm) and weight (0.6 pounds) that surpass the iPad Mini in the thin-and-light category. Available in black or white, the new Sony runs the latest version of Android, 4.4 KitKat, and includes a sizeable amount of RAM (3GB) if not built-in storage (16GB). It includes a slightly faster quad-core Snapdragon processor (2.5GHz versus 2.3GHz) than its Z2 Tablet predecessor , while retaining its waterproof and dust-resistant build quality (earning a 65/68 IP rating).

Other premium features include a full 1080p screen (1,920x1,080) -- the same resolution as on the full-size Z2 Tablet on a smaller display --  a large 4,500mAh battery that the company claims will provide 13 hours of video playback, and Sony's DSEE HX audio technology. It also packs Sony's lauded 8-megapixel rear-facing camera using its Exmor RS sensor and a 2.2-megapixel front-facing webcam.

The Z3 Tablet Compact is also notable for its compatibility with Sony's PlayStation 4 videogame console. Like other Experia devices, it supports PS4 Remote Play (starting in November), which allows you to stream PS4 games to play on the tablet while you're connected to your home Wi-Fi network. (Useful if someone else is watching the TV you normally game on, or you want to play somewhere else in the house.) The optional GCM10 Game Control Mount allows you to connect a Sony DualShock controller directly to the tablet.

While we can guess that all of these high-end features will mean the Z3 Table Compact will come with a high-end price, we don't know for sure what that specific price will be. We also don't know a precise release date, though Sony promises that both LTE and Wi-Fi versions of the Z3 Tablet Compact will become available sometime this fall.