Jolicloud chief Tariq Krim has shown off a preview of the user interface for version 1.2 of his company's cloud-centric Linux distribution.

On Thursday — just days after Jolicloud 1.1.1 came out, bringing support for old Nvidia graphics cards — Krim used a post on Twitter to link to an "exclusive preview" of Jolicloud 1.2.

Before he posted the link to the screenshot, he wrote: "Excited by Jolicloud 1.2 : on any modern browser or a recycled computer you will experience the future!"

The GUI displayed in the interface — Jolicloud has a front-end written in HTML 5 — looks mostly like that found on Jolicloud 1.1. The only discernible difference is a restyled update bar.

Jolicloud is a light-weight, cloud-based OS that was originally pitched at netbook users but is now also being pushed as suitable for old computers with limited specifications by today's standards. It is based on Ubuntu Netbook Remix and presents Linux, Windows and web-based apps in identical fashion.

Krim said in a subsequent tweet that he would release further details next week. 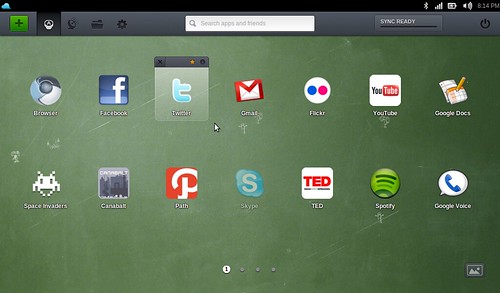