Get is Norway's second largest consumer broadband operator, both in terms of customer numbers as well as revenue, according to Norwegian telecom regulator NPT.

Get serves more than 500,000 households in Norway with broadband and cable TV. With the addition of Get's customer base, TDC becomes Scandinavia's largest cable TV business with a total of more than 1.7 million customers. 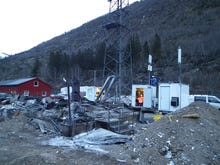 What do you do when your mobile provider burns to the ground?

Following a fire that destroyed several buildings, residents of Lærdal found their mobile, landline and broadband services downed. Here's how their mobile companies dealt with the crisis - and what happened next.

Get mainly focuses on the consumer market, building and operating its own fibre-coax hybrid network in urban areas of Norway.

According to a statement from TDC, Get's network covers approximately 700,000 homes and businesses, figures which include its 500,000 active customers.

After a couple of smaller acquisitions last year, Get has also been moving into the SMB fibre access market. According to estimates made by Norwegian telecom news service Telecom Revy, Get is fifth largest fibre operator in Norway, with more than 27,000 customers on its network.

Get's network and customer base is complementary to TDC's own in Norway. TDC has a fibre backbone in Norway and in Scandinavia, which is mainly used to serve large enterprise customers.

When this network is connected with Get's, TDC expects more business, both in the consumer and enterprise segments.

"On a more technical level, we can reap several synergies by combining our networks in a complete Norwegian infrastructure based on fibre and coaxial cables. On the business to business market, we will over time be able to offer the same broad product portfolio as TDC Group in Denmark," Carsten Dilling, president and CEO of TDC, said in a statement.

The acquisition is pending approval from the Norwegian competition authorities, which is expected before the end of this year.