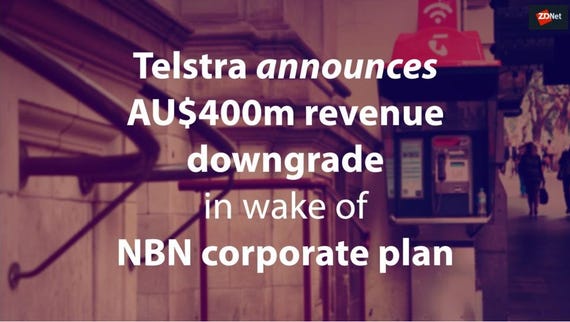 Telstra has informed the market it is expecting AU$400 million less in revenue following the release of NBN's latest corporate plan on Friday.

NBN said on Friday it has revised down its number of active premises from 7.5 million to 7 million in 2020.

"This is purely a timing issue around deployment and activations, with the Ready to Connect footprint coming later during FY20 than originally forecast in the previous year's plan," NBN said.

"There is no expected material change to the underlying performance of the business and revenue is forecast to recover to expected levels in subsequent years."

However, the shift will see Telstra receive AU$300 million less in payments from NBN, with Telstra lowering the payment range to AU$1.3 billion to AU$1.7 billion.

"Telstra no longer anticipates FY20 being the year of peak nbn headwind and now estimates this will occur in FY21," Telstra said on Monday.

Last month, Telstra blamed the NBN as the cause of a drop in profitability, claiming it was responsible for the telco's AU$600 million in negative EBITDA. The company said at the time that the cost it has accrued from the NBN had risen to AU$1.7 billion in total, and that it has only seen half of the impact.

In recent times, NBN and Telstra have engaged in a round of finger pointing over which company is responsible for money disappearing from which company's balance sheet.

Telstra CEO Andy Penn said at the time it was unprofitable for retailers to resell the NBN at current prices.

"Our corporate plan points to a continuing payment to Telstra for access to ducts, dark fibre and facilities of AU$1 billion annually from FY21, representing 20% of forecast revenues, and continuing for decades after the build is completed.

On Friday, NBN revealed it would miss previous predictions that it would be cash flow positive in 2022, pushing that threshold back a year to 2023.

This change is due to the company increasing its expected capital expenditure from AU$1.2 billion in 2022 to AU$1.4 billion, thereby sinking its tiny AU$100 million cash flow for 2022 predicted last year.

Cash is king when Australia is lacking in Eftpos.