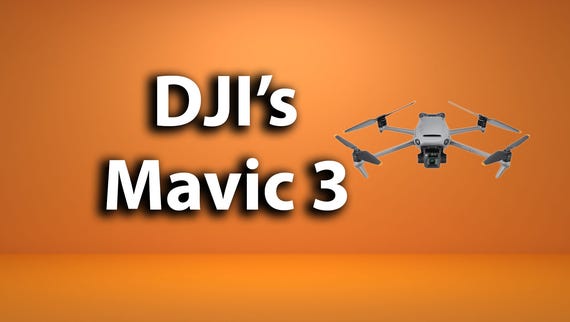 And it's a solid update.

This update contains a whole host of features and bug fixes:

This update follows a smaller update for the Mavic 3 that landed back in December of last year.

Installing new firmware on a drone is a little more nerve-wracking than installing it on something like a smartphone. A crash on the iPhone is a lot less permanent than a crash with a drone. But I did what I normally do and installed the firmware as soon as it became available late last night -- there's an app update for iOS, Android, and anyone using the RC Pro controller and a firmware update for the drone).

The update went smoothly, and everything seems to work as promised.

I've run a few batteries through the Mavic 3, and the difference is like night and day. The new features are welcomed and work as expected (but ,in all honesty, I don't tend to use features like QuickShots and MasterShots that much, but I know that many do). It's nice having the panorama feature available now (I used that a lot), and things like color assist in D-Log is very welcomed.

As far as flight characteristics go, this is also something that has changed a lot. I always felt that the Mavic 3 was somewhat aggressive in flight, and after a couple of hours of flight on this new firmware (in all with the Mavic 3, I have about 130 miles/80 hours of flight time), it feels an awful lot smoother.

I'm also noticing that getting a GPS lock is much faster than it was. What used to take minutes now feels fast. That's a nice improvement because it speeds up take offs.

It's not buttery smooth flying, especially when maneuvering, but it's a lot better than it was.

However, I do notice a rather fierce "dipping" that happens on braking. The tail dips when breaking from flying forwards, and the front dips when breaking in reverse. Now, this is how drones fly, and the Mavic 3 is quite big at a hair under 900g, and it is a good thing that this drone can stop on a dime.

And in normal flight, when 20 meters or so above ground level, you don't notice that.

But, when flying close to the ground, the gimbal can't seem to keep up with this dipping, and there's a bit of a jump that's visible in any video that's recorded. I'm not "Google Maps drone pilot," and I like to fly close to things, and there's no amount of smooth flying that eliminates this twitch the gimbal does (and remember, I'm using DJI's RC Pro controller, which is way better than the stock controller -- which is the same controller that DJI ships with the $450 Mini 2).

And, while on the subject of that stock controller, I feel like DJI was saving money when they shipped a $2,000+ prosumer drone with the same controller that it bundles with its consumer drones.

But it is as it is, and for me, it is the best drone that I have ever flown, even compared to heavyweights like the Inspire 2 line, which are huge and noisy and need a lot of setup before you can get them into the air.

But, there's another but. I've not had many problems with my Mavic 3. I've read a lot about crashes and flyaways and erratic behavior and disconnections that some people have been experiencing.

Your mileage may vary.

As for the future, here are a couple of things I'd like to see DJI work on in relation to future firmware updates for the Mavic 3.

I get it that DJI calls this "Explore Mode" or something, but if you put a dual-camera array on a drone aimed at pros, then pros are going to try to use it. At the end of the day, it's not anywhere near the same quality as the Hasselblad 4/3-inch sensor main camera, so expecting similar results is unrealistic. However, manual control over exposure and white balance would help a lot.

Then it's just a case of refinement. Smoother flight characteristics in Cine mode would be welcomed for sure by me.

As for some of the things on the wish lists of people on social media, I think it's easy to get unrealistic. I don't see any form of ActiveTrack tracking coming to the Tele lens. Even on a wide-angle camera with plenty of leeway for the tracking to work, the results are sort of OK at best. I don't see DJI getting ActiveTrack to work on a camera with such a narrow field of view with the current technology.

I've also come across people wanting DJI to make the two cameras on the drone output something that's more uniform (think the twin and triple-camera arrays you find on smartphones these days). Well, one camera is a Hasselblad, and the other is a smartphone camera. The best you're going to get there is making the Hasselblad look like a smartphone camera.

We've bought a horse -- admittedly a thoroughbred racehorse -- and not a unicorn.

A few things about the Mavic 3 still feel like a compromise made in the name of money, which is odd for such an expensive, premium, prosumer product.

The toy controller is one, and that Tele camera is another.

I wasn't there at DJI to know what the Mavic 3 was intended to be and how much price considerations eroded this initial vision for the Mavic 3. But we have what we have, and it's very good. Yes, future integrations will likely have a better camera array, but that's for the future.

For most people the $450 Mini 2 is perfect. It's small, highly portable, and can capture amazing photos and video.

The Mini 2 is a superb drone.

For someone who needs more, then the Air 2s is a huge upgrade. Lots more power, better camera, and more functionality. It's more money, but you get a lot more drone for your money.

The Mavic 3 is for those pros at the higher end. It's a monster in terms of power and can fly in quite inclement weather. The camera is a little bit better in trickier lighting than what the Mini 2 or Air2s has to offer, and the all-round obstacle avoidance is useful (people still crash their Mavic 3s though, and I just view this obstacle avoidance as an additional safety mechanism, not something I rely on).

But if you need a pro drone, then the Mavic 3 is a great choice (the Mavic 3 Cine, which is even more money, is exclusive for people who need a ProRes workflow in my opinion). It's a lot of money, but you get a lot of drone for that money.