The addition of Tobii's support for Windows Hello could bump up the number of Windows 10 devices out there that can take advantage Windows Hello, Microsoft's system for using fingerprints and iris recognition to replace passwords.

New devices like Microsoft's Surface Pro 4 and Surface Book support Windows Hello biometric login, while Intel has backed the feature with its RealSense camera integrated with a handful of new PCs, laptops and 2-in-1 devices from Lenovo, Dell, HP and Asus. That still, however, leaves a lot of Windows 10 machines that can't use Windows Hello biometric authentication.

Now consumers who own Windows 10 PCs besides those with special hardware can add support for Windows Hello through Tobii's EyeX Contoller, a slim bar that sits on the bottom of a laptop display and retails for €119. 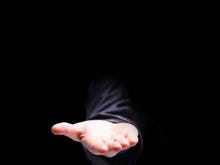 Can 'pay with your palm' biometrics help break Sweden's card addiction? Who needs a smartphone to make low-value payments when giving the till a high five can do the same job?

Paying extra to enable biometric authentication might not be ideal, but besides authentication, the Tobii device lets users "point with their eyes" on a display and can be used with games. It also can dim the display when the user looks away.

According to Tobii, Windows 10 users with the EyeX controller will be able to login using Windows Hello in a variety of lighting conditions, including in the dark. The feature is also supported SteelSeries' Sentry devices for gamers.

Windows Hello will also work with Tobii's newly announced IS4 with EyeChip system on chip, which is aimed at PC and tablet makers, meaning more hardware could support Microsoft's biometric system in the future.

As Tobii highlights, OEMs will could see value in improving the user experience by allowing a person to log in simply by sitting in front of the device.

"Technology has a fundamental duty to understand humans better and improve their daily lives. With Windows Hello, a person never needs to remember their password to login," said Oscar Werner, president of Tobii Tech.

"Microsoft's interest to make Windows Hello work with Tobii eye-tracking devices is a testament to the value, both now and in the future, of our joint ability to enhance the Windows experience for consumers."