Toshiba has announced the launch of a second-generation Chromebook as well as two touchscreen Windows 8.1 laptops, all aimed at similar markets.

Announced today at the IFA tech fair in Berlin, Toshiba's second stab at Chromebooks comes with a 13.3-inch display with a 16:9 aspect ratio. The Chromebook 2 will be available in two models, one with a 1366 x 768p HD display, the other with a 1920 x 1080p Full HD resolution display.

At 1.35kg, Toshiba's new Chromebook is tad lighter than its first one, and slightly slimmer. The new models both come with an Intel Celeron processor and 16GB internal storage, while the cheaper of the two offers 2GB RAM, compared with the Full HD model's more respectable 4GB RAM.

As with others Chromebooks, users get an additional 100GB Google Drive online storage for two years, and naturally, Google's productivity apps onboard.

Toshiba's Chromebook 2 will be available in the UK during the first quarter of 2015.

The company also released two new Windows 8.1 machines, which should make for a fair comparison to buyers interested in a low-cost alternative to Chromebooks, though the Windows devices have 11.6-inch displays. 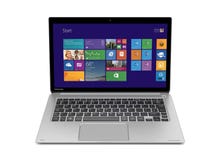 The thin, lightweight and stylish Kira-101's standout feature is its high-resolution 13.3-inch touchscreen. It delivers solid performance and good battery life, but the price is high.

The Toshiba Satellite Radius 11 and its new Satellite CL10-B will be available in the UK during the fourth quarter of 2014, the company said.

The Satellite Radius 11 is available with either an Intel Celeron or Pentium processors, and comes with 500GB internal storage, 4GB DDRL memory. It weighs 1.3kg, and should cost around £329.

One of the main differentiators in the Satellite Radius 11 is its flexible display that can on its 360 degree hinge, be twisted into five different positions.

Meanwhile, the Satellite CL10-B is only available wit an Intel Celeron processor, and comes with 32GB storage, 2GB memory, and weighs 1.1kg. It's expected to have a price tag of £199.