In the coming weeks, BlackBerry will roll out a pair of software updates to all devices running on BlackBerry 10. Version 10.3.2 is arriving with a few feature additions while BlackBerry Blend sees a refreshed user interface making it easier to use your handset with a computer or tablet. 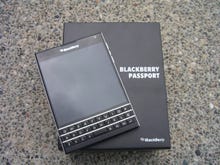 BlackBerry Passport review: World's best QWERTY in a uniquely functional form factor BlackBerry needed to go back to its hardware QWERTY roots. With the Passport they did just that and a whole lot more.

The BlackBerry Calendar app will, for example, become smarter at helping handle notifications. Meeting Mode was previously available to block notifications during meetings; after the update, you'll be able to customize events affected by Meeting Mode.

That means notifications can be silenced for events on some calendars while kept active for other calendars.

BlackBerry says it has several camera improvements for handsets in the update as well. Look for better low light performance and face-detection plus reduced motion blur in captured images.

Specific to BlackBerry users in the U.S. using devices other than the Passport and Classic phones, the Amazon AppStore will be added to handsets with BlackBerry 10.3.2. The software's Action Bar gains new icons and will show your most often used functions.

The new look of BlackBerry Blend 1.2 is, according to the company, based on user feedback for faster navigation. It's the software that brings information from a BlackBerry to a connected computer or tablet. You can view and take action on notifications or messages and view files on your BlackBerry handset while using a Mac or Windows computer, or on iPads and Android tablets.

BlackBerry says the updates will appear pending carrier testing and approval, so depending on your network provider, it may take several weeks -- if not longer -- before your device gets the software. Those with unlocked handsets may see it sooner, of course.

Join Discussion for: Two reasons your BlackBerry is about to get...