To proponents of the "PC is dead" bandwagon, be aware there is still a pulse, based on latest analyst estimates. 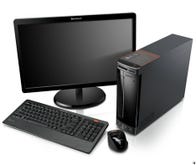 The PC: Back from the dead, again After years of PC shipments declining, Gartner reports the market is picking up in the US and Europe.

Gartner reported on Monday that the worldwide PC industry grew by roughly one percent, year-over-year, during the fourth quarter of 2014 with 83.7 million units shipped.

IDC estimates were less than positive with a year-over-year decline of 2.4 percent with 80.8 million units shipped. The silver lining is that is above the previous forecast calling for 4.8 percent in declines. IDC labeled 2014 as "the third consecutive year with overall volumes declining" for the global PC industry with 308.6 million units shipped worldwide.

Lenovo continues to be the biggest player here, according to both market research firms, growing significantly in the United States and Europe/Middle East/Africa regions.

Gartner analysts highlighted the fourth quarter also gave way to the biggest market share difference between Lenovo and its routine closest competitor in second place, Hewlett-Packard, which garnered 18.8 percent of the market. Gartner attributed the widening gap to HP's slow-but-sure shift to "the device market."

In the United States, the PC market is poised for "rebound" headlines with a 13.1 percent uptick during the fourth quarter with 18.1 million units shipped, according to Gartner, which defined this leap as the "the fastest growth seen in the market in the last four years," with HP demonstrating the highest growth rate at 26.2 percent.

IDC researchers also touted HP's "remarkable quarter," concurring with an estimated uptick at 26 percent year-over-year. But portable computers continue to demonstrate the most growth and stamina with double-digit growth, while desktops slid by more than 10 percent.

"Growth of Chrome, Bing, all-in-ones, ultraslim, convertibles, and touch systems similarly make PCs more compelling and competitive," said Loren Loverde, vice president of IDC's Worldwide PC Tracker group, in Monday's report. "Nevertheless, some of the gains are relatively small, and weakening drivers like Bing promotions and end of XP support transitions, cast a shadow of doubt on the strength of the market going into 2015."

Mikako Kitagawa, a principal analyst at Gartner, championed the year-end holiday shopping season in the report, arguing "the primary driver was mobile PCs including regular notebooks, thin and light notebooks and 2-1s."

"Low priced notebooks with about a $300-200 price point boosted shipments while thin/light notebooks and two-in-ones (laptops with a detachable or bendable screen) showed strong growth," wrote Kitagawa. "These results supports our assumption that consumer spending is returning to the PC as tablet penetration has reached the majority of the market."

IDC defines PCs to include desktops, laptops, ultraslim notebooks, Chromebooks and workstations, but not handhelds, x86 servers and tablets (i.e. iPad, or tablets with detachable keyboards running either Windows or Android).