Full Bio
Posted in Between the Lines on April 21, 2015 | Topic: Internet of Things

Under Armour's has big digital plans and a stable of apps that collectively have 130 million unique registered users, but CEO Kevin Plank said there's more to come as the connected fitness strategy is fleshed out more in September.

The fitness apparel company recently closed the purchases of Endomondo and MyFitnessPal to give it a collection of four key apps that will log workouts, sleep and nutrition and ultimately give Under Armour data it can use to make its gear smarter.

Speaking on the company's first quarter earnings conference call, Plank said the digital health business will provide a halo effect for the entire company. For now, Under Armour is seeing an average of 130,000 downloads a day of its apps and the Holy Grail creating a platform that leads the entire company, said Plank. This platform will drive subscriptions, advertising as well as apparel sales if Under Armour's master plan works.

Plank also added that three of the company's four apps are prepped for the Apple Watch too.

In other words, Under Armour needs to go from a collection of apps more akin to smart clothing connected to those platforms.

As for future digital efforts, Plank said "we anticipate to have some very large news for you around Under Armour's investor day in September." 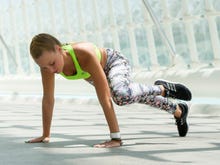 Wearables? Bet your shirt on it: Smart garments are about to take off Smart garments may be largely confined to sport for the moment but technology-enabled clothing could well be about to find far bigger audiences outside the fitness industry.

Plank added that Under Armour's main focus for its acquired apps and teams behind them---MyFitnessPal, MapMyFitness and Endomondo---is to get comfortable with the digital brainpower, travel between hubs in Baltimore, San Francisco, Austin and Copenhagen. Once Under Armour gets the collaboration down, Plank said he will define what digital success looks like a little more.

"We're also working on building greater new products and we want a little more time to reflect and get used to the flights between Baltimore to Austin to San Francisco to Copenhagen," said Plank.

He also said that the aim is to meld his digital staff of 500 into a cohesive team. In the meantime, Plank is looking to get his acquired digital teams "comfortable with us and us comfortable with them."

Join Discussion for: Under Armour's digital product plan to be...