Underwater robots kill invasive fish to save the oceans

Killer robots are helping to restore biodiversity in fragile oceans across the globe.
Written by Kelly McSweeney, Contributing Editor on Oct. 31, 2016

Robots can help undo some of the damage that has been done to our environment. Unmanned aerial vehicles are already being used to track endangered wildlife and assist land conservation efforts by mapping ecosystems and monitoring protected areas.

Meanwhile at sea, autonomous sailing drones are monitoring ocean water to detect any pollution and track changes in temperature and pH. Now, underwater robots are also working to restore biodiversity by hunting invasive species. Divers around the world have been trying to control invasive marine animals by hand, but robots could be more precise, effective, and constant.

Lionfish in the Atlantic Ocean and Caribbean Sea

One of the trickiest ocean pests is the lionfish. This fish originated in a balanced ecosystem in the Indian and Pacific Oceans, where the population was controlled by natural predators. It is gorgeous -- striped, spiky, and colorful -- which is quite impressive in aquariums. Unfortunately, this is likely why lionfish ended up in the Atlantic Ocean, where they were first spotted off the Florida coast in the mid-eighties. They have since thrived in this unfamiliar habitat, where they have no natural predators and plenty of food.

Lionfish have now multiplied and spread up the eastern US coastline and down into the Caribbean Sea. They feast on native fish populations, including species that help control algae on reefs. If those fish disappear, algae will likely grow out of control, which can smother the reefs and eventually kill them.

Lionfish are particularly hard to kill, because they ignore baited hooks and often swim too deep for divers to reach them with spears. A consortium of scientists that includes iRobot, the creators of Roomba, is developing an underwater robot to kill lionfish.

The group, called Robots In Service of the Environment (RISE), has built a remotely operated vehicle that delivers a lethal electric shock to the fish and then collects its body in a net or cage. The lionfish are so used to life without predators that they don't even attempt to swim away from the robot's deadly arms.

On the other side of the globe, a population explosion of crown-of-thorns starfish (COTS) is eating away at the Great Barrier Reef. According to scientists at the National Oceanic and Atmospheric Administration (NOAA), the reef is already dying because of several environmental factors, including rising ocean temperatures.

At the same time, COTS, which naturally eat coral polyps, are proliferating. Scientists haven't identified the cause of the COTS outbreak, but they have speculated that it could be due to overfishing of predators or an unlucky mix of a natural surge in nutrient levels coinciding with the starfish's spawning season. What we do know is that COTS are a leading cause of coral cover loss.

That's why Drs. Matthew Dunbabin and Feras Dayoub at the Queensland University of Technology (QUT) in Australia have developed autonomous underwater robots that can identify and kill starfish. The robot swims and identifies COTS autonomously using stereoscopic cameras for depth perception, five thrusters to maintain stability, GPS and pitch-and-roll sensors. Then it uses a pneumatic injection arm to injects a fatal dose of bile salts into the fish.

Machine learning (ML) and computer vision (CV) based technologies have reached the point of maturity, which opens the door for their use in every aspect of our daily lives. This is why big companies such as Google and Apple are in hurry to buy new emerging CV and ML companies. COTSbot used both computer vision and machine learning and demonstrated what a lot of the tech-savvy business professionals already know about how powerful these technologies are.

Now, the team is working with the Great Barrier Reef foundation to transform the original COTSbot into a multi-purpose robotic reef protector. Dayoub says, "We see it as a Swiss Army Knife for a wide range of marine monitoring and management activities." 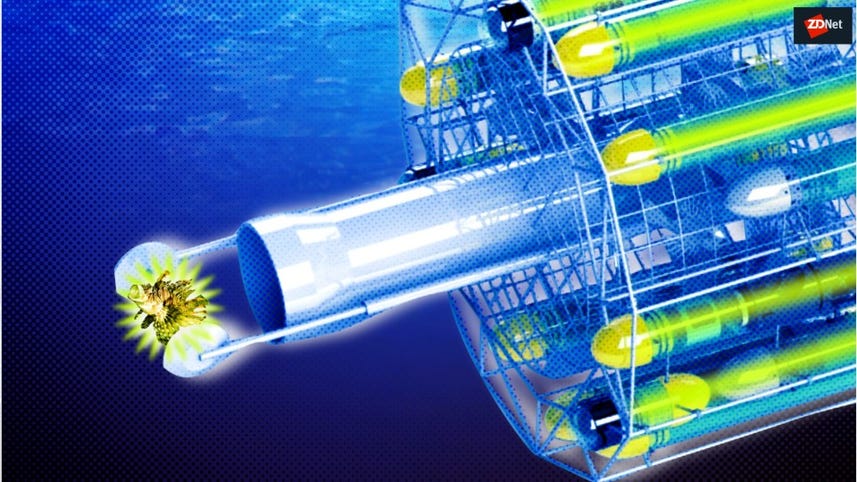 The Google grant will be used to "build a smaller, more versatile robot with a range of attachments to perform tasks such as: monitoring water quality, pollution, siltation, marine populations or bleaching events; mapping reefs and ocean floor at scales not previously possible; and managing other invasive pests." Not surprisingly, the QUT team has already fielded several requests for tackling lionfish.