Android L is still some months away from being officially available, but the preview release has given developers enough to port the firmware to HTC's One M7.

Google only released its preview Android L firmware for the Nexus 5 and latest Nexus 7 at the start of the month, but within days developers had built ports extending what was available in the preview to the Nexus 4 and older Nexus 7 models . 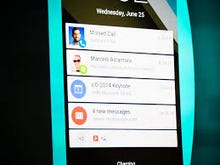 Others meanwhile have extracted working components, such as the Android L keyboard — it made a brief appearance on the Play Store before being removed by Google last week . And there's even the Nova launcher, with features borrowed from the preview release.

As of last Friday, HTC One M7 owners have also had another way to play with Android L, thanks to about two weeks' of work from XDA developer Suyash Srijan who created an L port for the old HTC flagship.

Given the port's status as an unofficial 'alpha' release of an incomplete product, it's probably not the wisest thing to flash to a HTC One being used as a primary phone. Some of the features that aren't working including wi-fi, Bluetooth, sensors, camera, and sound. In other words, "half the things that don't work" could render a device fairly useless to anyone wanting more than a sneak peek of Android L on their HTC One.

For HTC One owners that do want to install the firmware, the process should take about 15 minutes. HTC One M7 owners wanting the real deal could be in store for the Android L update when it arrives later this year — probably around the same timeframe this year as KitKat's launch last October.

Other devices that are most likely to get the Android L update include of course the Nexus 5, Nexus 7, Nexus 4 and Nexus 10.

Besides the new 'material design' UI overhaul and improved battery performance, Google has taken a leaf from Apple's book on notifications on a locked iOS screen, which pop-up when the screen is off. It's a handy feature that's missing from KitKat but with Android L, developers will be able to push summaries of messages in some apps to the lockscreen rather than be limited to icons that can't be viewed from the lockscreen.