Despite the amazing advances in hi def video devices there are still huge issues with the competence of the person behind the camera. Lighting and camera stability are two fundamentals of watchable video, and if you own Flip cameras I'm sure you've been disappointed by your herky jerky footage of important occasions you'd been looking forward to seeing, whether business or pleasure, which turned out to be virtually unwatchable.

I just tested a deceptively simple but effective device called the readysteady, a pocket mini steadicam device which helps you smooth out your video shoots, especially when you're on the move.

It's really simple to use and helps you stabilize a Flip or other pocket video camera to iron out most of the jiggles by allowing you to use your natural balance. There's plenty of explanatory footage and verbage on the readysteady website but as the before and after video above shows there can be a marked difference in image smoothness when using this simple device, particularly on a steep hill as I illustrate.

By using your entire body as an image stabilizer you can control most of those wrist and arm movements that can make Flip video such hard work to watch. Obviously you're not going to get the type of dolly on rails camera pans and tracks we're used to on TV and Film but this device should significantly improve your picture quality. 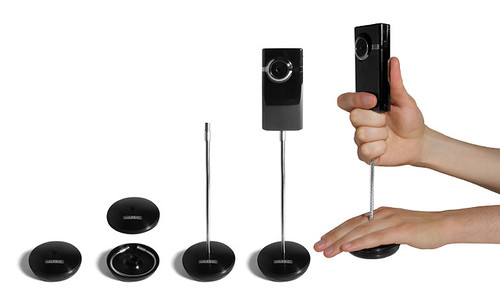 The golden rule is taking it slow and smooth, which is true with cameras in all price ranges. This device won't help you to get into a Zen state of slow motion pans and Tai Chi glides with your little camera, but it will help you to be more aware of not waving the camera around and producing motion sickness inducing footage...
Nicely made in the USA, the all metal readysteady is about the size of a chewing tobacco tin and quickly unscrews for assembly and use as the image here illustrates.