Full Bio
Posted in Between the Lines on January 15, 2018 | Topic: Blockchain 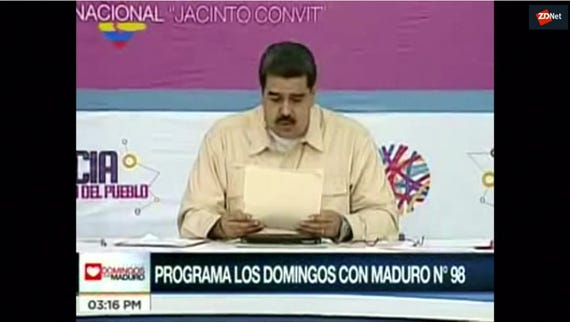 Venezuelan President Nicolas Maduro has called for other countries to adopt the oil-backed cryptocurrency Petro, tipped as a way out of the country's economic crisis.

Back in December, Maduro unveiled the cryptocurrency, which is backed by the country's oil reserves, as well as gas and precious metals.

The president said that Petro would provide an avenue to "advance in issues of monetary sovereignty, to make financial transactions and overcome the financial blockade."

Venezuela is in the grip of an economic crisis, with the cost of living soaring, wages stagnating, and heavy debt.

Some economists predict the country is on the verge of hyperinflation and without serious changes, Venezuela's economy may be at risk of collapse.

The country is also struggling with sanctions imposed by the US in relation to corruption and drug trafficking.

Maduro has not publicly explained how the cryptocurrency will function, nor how trading will be managed. However, as reported by Bitcoin News, the president is still attempting to find backers for the ambitious project.

Maduro held a meeting recently with the Bolivarian Alliance for the Peoples of Our America, Treaty of Commerce of the Peoples (Alba), which encompasses Antigua and Barbuda, Bolivia, Cuba, Dominica, Ecuador, Nicaragua, Saint Lucia, Saint Vincent and the Grenadines, Saint Kitts and Nevis, Grenada, and Venezuela.

During the meeting, the president called on the countries to "assume together the creation of the cryptocurrency, the Petro," as an "integration currency of our peoples."

Maduro also said the cryptocurrency represents "integration of the 21st century in a bold way, but also in a creative way."

The president needs backers if this project is going to gain any traction.

While other countries including South Korea are shying away from virtual currencies, Venezuela's resource-backed variant may have the potential to chip away at the economic mountain the country faces -- or it could prove to be an expensive mistake.

Opposition MPs in the country have already ruled Petro as illegal, and without the government's support, the creation of Petro will be dead in the water. It may be that Maduro is hoping the backing of other countries will sway the political opposition to the project.

Join Discussion for: Venezuela asks other countries to adopt oil-backed...