For all those HTML/CSS bods out there, do you ever tire of copypasting CSS from Firebug to YourFavouriteTextEditor? 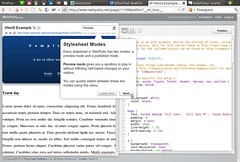 Over to Fog Creek Software who have made such a thing. No less a CSS Guru than the eminent and eminently likeable Eric Meyer tweeted about WebPutty.

Of course, Twitter doesn't really lend itself to lengthy recommendations. He said: “This looks kinda nifty”.

I've signed up with my Google account to get a screenshot, will be testing it out my next big CSS adventure and get some feedback to the world.

Postscript: isn't that the Notepad++ chameleon sitting proud as the favicon?