As an online service, BPOS (Business Productivity Online Suite - Exchange and SharePoint hosted by Microsoft in its data centres) gets new features every six to eight weeks - but these are incremental improvements, adding options that are already in the on-premise versions. For example, mailbox size will increase from 5GB to 25GB this year, and the Mac sign-in client will support Snow Leopard. By September there will be a BlackBerry portal with user activation, remote device wipe and self-service management for BlackBerry users (if they have at least BlackBerry OS 4.5 on their handsets).

But the next major version coming the next few months will be based on Exchange and SharePoint 2010; that means users get new Exchange features like transcribed voice mail, integrated archiving, conversation view, mail tips that warn you if you're sending a message to a large list, or to someone who has an out-of-office message. SharePoint 2010 gets the new social network features, improved search, integration with the Office 2010 apps (for opening and saving files directly) - and as well as the Excel, Visio and Access Services for building apps on your intranet, users get the business versions of the Office Web Apps.

Customers have found the identity and authentication options in BPOS limiting, said principle program manager Dan Kershaw; the password policy isn't configurable, you can't use the same credentials used inside the company for single sign-on with BPOS so admins have to maintain separate credentials, there's no two-factor authentication and no role-based administration. All that changes in the next version, with password policy controls for Microsoft Online IDs, five admin roles and the option of federated IDs with two-factor authentication for single sign-on, though federated identity will mean running an on-premise server with ADFS 2.0 (and an ADFS proxy as well if you have off-site users. This will all be simpler with the new admin console, plus there's a new (and optional) service connector to manage clients PCs and apps.

More BPOS administration will be possible through PowerShell in the next version, including managing federated identities, domains, licences, admin permissions and security groups (with the current version of the service you can only create, update or remove users). Partners who resell BPOS will also get PowerShell commandlets for administering the service on their behalf. 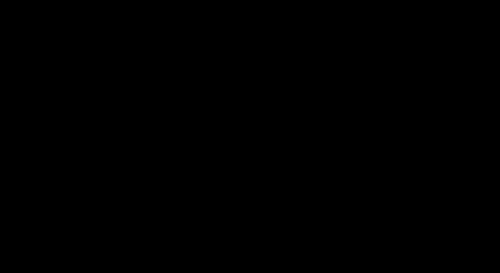 BPOS is a lot more than just Exchange online; it also includes Forefront for securing online Exchange, and Communications Online; the service version of Office Communications Server and LiveMeeting, which get a common client in the upcoming Communicator 14 (previously IT teams have had to manage two separate clients on user machines). The director of the OCS team, Denis Karlinksy, explained that this would be the focus of the next version of the service; "We're bringing together IM, presence and conferencing and making every meeting an online meeting." He didn't give a firm date for Communicator 14 ("it's TBD - we're building it right now") but the next major version of Communications Online is expected in the autumn.

Communicator 14 will handle meetings with up to 250 attendees; the majority of meetings for actual collaboration involve between three and five people, says Karlinsky. Less than 2% of all online meetings on the service involve more than 500 people and they're not collaborative at that size, so Microsoft will use partners to offer a version of the service that supports meetings of up to 1,250 people. 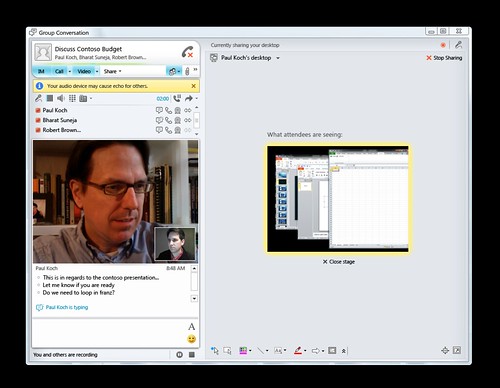 Video chat and document sharing in Communicator 14 - which will work with Communications Online; the new audio bar under the name shows you the connection is working

Karlinsky said that Outlook integration was the most common request for the service and promised "Nobody is going to have better and deeper integration into Outlook than we are. We expose the APIs for anyone to do it but no-one is going to be iterating on that faster and supporting it deeper than we are." Integration into Office will be extensive with multiple ways of starting a conversation from the ribbon; users will be able to click to ask a colleague to IM them or call them and they'll be able to specify a subject for the call themselves or have the document title be used automatically. Outlook reminders for online meetings will have a Join meeting button in the reminder dialog.

Meeting URLs will be much shorter and simpler so they won't be split over multiple lines (in some email clients this means the link wouldn't work). There will also be improvements to the mobile experience for joining a meeting with a single click, using a Silverlight client.

Improvements to the service itself include better federation for IM and presence. "A lot of limits we have today will be gone with BPOS," said Ziv Fass, Senior Product Manager in the OCS team. You can’t federate between OCS and Communications Online today; that will be possible in the Communicator 14 timeframe, so you can have different departments using the server and service and they'll be able to communicate with each other. There will also be what Fass calls "full integration" with Exchange and SharePoint, on premise or online. Today that only gives you IM and presence; with the next version it includes unified messaging, including using the calendar to determine if someone is available to chat, using online Exchange for voicemail and embedding IM and conferencing functionality in the new Outlook Web Access provided with Exchange 2010. Integration will go both ways, promises Fass; "You can run OCS on premise and run SharePoint and Exchange online and it will work seamlessly together with no need for gateways".

Federation will be important because one key OCS feature that won’t be in the new versions of Communications Online initially is integrated voice calls, using the service instead of a PBX; this will come some time later ("it might be more than a year later," says Fass "but it won’t be years"). This matches the way companies set up OCS in house, Karlinsky says; "What we’ve seen consistently for customer going on premise is the workload you roll out first is IM and presence, the next workload is conferencing and then the next workload is voice because there are lot of things to consider on the voice side. We’re going to deliver on IM presence and conferencing Immediately. We've got to put voice online. Voice online is a tough nut to crack; we’re on track to crack it but it wont be online in the fall."

Voice is a good example of the way BPOS is currently catching up to the on-premise versions by adding features they already have. In future Microsoft talks about developing for its services first and then bringing proven features into the server versions. The change, says Karlinsky, will mean "It's not server first and then service it's equal; how do we get all the functionality there so we blur the experience?" Mary Branscombe

Join Discussion for: What's in the next versions of BPOS and Online...