Apple's first "phablet," the iPhone 6 Plus, appears to be a hit out of the gate, just as many predicted (if not the late Steve Jobs). With its 5.5-inch screen, the large-sized smartphone is already being seen as a threat to another Apple best seller, the 8-inch iPad mini. But that might not be the only tablet that is in jeopardy. 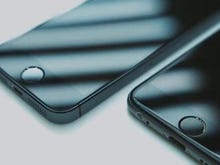 One third-party case maker says it has the specifications for the larger 5.5-inch iPhone, a phablet-sized device. Will it cannibalize iPad mini sales?

Market research firms are measuring the rise of the phablet and analzying its impact on the rest of the mobile device industry. According to TabTimes, TECHnalysis Research's chief analyst Bob O’Donnell has identified one potential casualty that could have widespread ramifications for many companies: 7-inch tablets. With their compact size, and often compact prices, 7-inch tablets have grown market share quickly, but TECHnalysis predicts as the tablet industry cools off over the next few years that larger-screen slates will swing back in favor.

Another firm has research that suggests the trend back toward bigger tablets may have already begun. Accenture performed a recent study that showed 72 percent of likely tablet buyers preferred a larger-screen tablet to a smaller-size one. ZDNet's Rajiv Reo sees a recent downturn in India's tablet sales as the result of phablet fever sweeping the country .

Though phablets have their detractors , given their awkward size for schlepping around and for placing phone calls, they do have some appeal in comparison to a 7-inch tablet, including better mobile connectivity given that many tablets are still purchased with Wi-Fi only. There will always be resistance from some who won't want to try to squeeze a giant phone into a pants pocket or purse, but as phone calls decline in favor of texting and many already slip those smaller tablets into jacket pockets, consumers seem to be adjusting to the bigger phones.

It may explain while the next Google Nexus tablet is rumored to be an 8.9-inch model instead of a 7-inch one. It will also be interesting to see if the rise of phablets will make Microsoft think twice about releasing a "Surface Mini" tablet, which ZDNet's own Mary Jo Foley believes wasn't going to see the light of day before 2015 anyway . Another important test will be the introduction of budget-priced 7-inch Windows 8 tablets like the Toshiba Encore Mini -- they are supposed to be a crucial means to get Windows onto more mobile devices, but if consumers are moving away from the small-tablet format, that strategy could get derailed.

Would you rather have a phablet or a 7-inch tablet? Do you think devices like the iPhone 6 Plus will lead to a decline in popularity of tiny tablets? Let us know your thoughts in the Talkback section below.