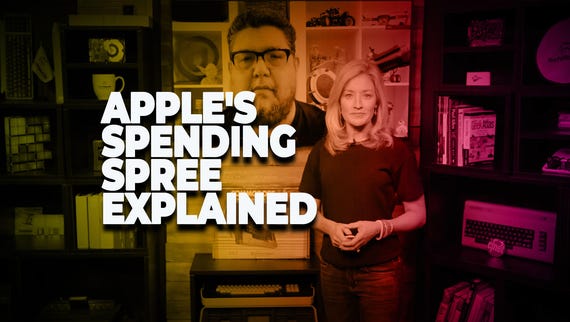 What Apple's latest acquisitions mean for the company
Watch Now

Even though Apple's market value briefly popped above $1 trillion last year, it has been relatively conservative in terms of the number of companies it's acquired over the years. According to Crunchbase, Apple has acquired 106 companies since its founding in 1976, or an average of 2.5 per year.

Of course, all three of these companies have grown over the years, and larger companies will make more acquisitions than smaller ones. So while Apple has averaged just over two acquisitions per year since its founding, it's acquired 10 companies in just the last 12 months.

This becomes particularly relevant as we approach Apple's WWDC early next month. WWDC is when Apple showcases new features for iOS and MacOS. History shows that some of those features have been derived directly from previous acquisitions, although not all debuted publicly at WWDC.

Perhaps the most famous is Siri. Siri was founded as a company in 2010 by SRI International-affiliated developers, who created an app for the iPhone. In October 2011, at Apple's yearly iPhone event, Apple introduced Siri as part of iOS.

In 2015 Apple acquired Faceshift, a motion capture technology once used in the Star Wars movies but later incorporated into iOS animojis. In 2017, Apple acquired Workflow, an iOS automation app that wound up becoming Siri Shortcuts. It was introduced at last year's WWDC.

Apple's largest acquisition to date was Beats, which it gobbled up in 2014 (although Beats still sells headphone products under its own name). The prevailing theory at the time was that Beats music rating software would aid iTunes music sales. Instead, some of Beats' tech, along with guidance from its very-music-industry-connected founders, morphed into a new Apple Music offering that was introduced at the 2015 WWDC. Since then, Apple Music has been an undeniable success, growing to more than 50 million paid subscribers.

So what about this year? What acquisitions did Apple make over the last 12 months that are likely to influence Apple's offerings into the future? Let's take a look.

Since March 2018, Apple has made 10 acquisitions that we know of -- here they are, and why we think they're important to Apple:

Texture was a digital magazine publishing platform owned by a partnership of Conde Nast, Hearst Magazines, KKR, Meredith, News Corp., Rogers Media, and Time, Inc. It offered a Netflix-like subscription model to a large assortment of big name periodicals. Founded in 2009, it was acquired by Apple in March 2018. The Apple News+ platform, announced in March, is a direct result of this acquisition.

Akonia was an AR (augmented reality) display company that developed a technology called HoloMirror, which was designed to be used in low-cost consumer AR head-mounted displays. Founded in 2012, it was acquired by Apple in August of 2018. Apple has made a big push for the use of AR on iPads. It's possible the Akonia technology will find its way into AR glasses or some other AR-related product.

Dialog has made charging and power management chips for iPhones since the very first iPhone was introduced in 2007. Dialog, founded way back in 1981, has relied on Apple for almost three quarters of its revenue.

In August 2018, Apple paid $300 million for "certain assets" and will be paying an additional $300 million over the next three years. The company remains an independent operation for now.

This acquisition scares us, primarily because of a statement that was on its website before the acquisition. It brags that its "algorithms are able to find the next Justin Bieber, before anyone else." The company produced music analytics technology that could be used to improve the music recommendation feature of Apple Music.

As an automated A&R (acquisitions and repertoire) platform, it might also aid Apple in talent scouting and recruiting new artists to the service. Asaii was founded in 2016. Apple acquired the company in October of 2018.

Silk Labs started as a Kickstarter hardware project for an intelligent smart home hub. The company scrapped that idea shortly after it launched, and instead focused on providing on-device AI computational capability.

This is a close fit for Apple, which has been pushing heavily on its privacy benefits over its competitors. Founded in 2015, Apple acquired the small 12-person team in November. Key technologies include people detection, facial recognition, object detection, and audio detection.

Platoon is most likely as much acqui-hire as it is technology acquisition. It was founded in 2016 by Denzyl Feigelson (a former live event and artist relations executive at Apple) and Saul Klein (who founded Lovefilm, which was acquired by Amazon and eventually became the core of Amazon Prime Video). Klein also invested in SoundCloud and Sonos.

Together, the two formed Platoon, a talent management and creative incubation service based in London. Apple acquired the firm (and the services of Feigelson and Klein) in December.

If you're following along carefully, you probably noticed that this was the second talent acquisition and management company Apple bought in less than a year. Clearly, Apple intends to continue moving beyond technology and begin producing its own entertainment content.

DataTiger is an AI marketing, big data, and real-time data marketing provider. There isn't a lot of public information about the firm, but it's likely Apple purchased the company to augment its outreach to current and prospective customers. Founded in 2016, Apple reportedly purchased the very small firm in February.

PullString was formerly known as ToyTalk, a technology company who's website says it creates voice applications for Alexa. It was formed in 2011 by former Pixar executives to "realize the dream of higher fidelity computer conversation."

Given that the company's technology has been used to power conversational interfaces with Alexa and Google Home Assistant, it's entirely likely this acquisition is designed to bolster Siri's lagging conversational prowess. Apple pulled the string on PullString in February.

Laserlike provided a "web scale content search, discovery, and personalization platform using advanced machine learning." Founded in 2015, it was acquired by Apple in March. This is another technology that might go a long way toward bolstering Siri's lagging machine learning capabilities.

Very little is publicly available about Stamplay, but an article in PYMNTS.com explained that the company won a contest to "make the best use of Visa APIs." Given Apple Pay, the new Apple Card, and Apple's developer community, it's likely that Stamplay's technology will be used to help developers develop payment interfaces.

So there you are -- 10 acquisitions. There's a content play in Texture, an AR play in Akonia, more ownership of a power management chip company Apple has long relied upon, two artist and talent management plays, two machine learning operations, a voice skills property, and a payments and process purchase.

These acquisitions reinforce what we've been seeing from Apple in terms of its content and services focus. Apple is using acquisitions to bolster Siri, artist and creative management, and payments and process.

With the exception of Akonia, nothing here provides hints for exciting new hardware. All these acquisitions are meant to strengthen Apple's offerings, teams, and capabilities in areas it's still struggling to dominate.

If you were Tim Cook and the head of a sometimes trillion-dollar company, what companies would you rush to acquire? Let us know in the comments below.