EE said that 4G traffic has overtaken 3G traffic as availability of its LTE service has reached new areas. Since the introduction of 4G, data usage in rural parts of Scotland has increased 60 percent, usage in rural Wales is up 50 percent, and data in the South West of England has risen 49 percent, according to the operator.

The company said now it has 10 million customers using its 4G network.

Unlike 3G, 4G networks are designed for data usage, which means much faster upload and download speeds for customers. The average speeds on EE's 4G network are 12 to 15Mbps whereas the UK average for 3G is a snail-like 1.5Mbps. 4G networks can provide much faster speeds than this - up to 450Mbps has been demonstrated. 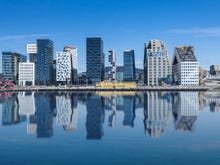 In 2009, Oslo became the first city to get 4G. Now, the operator that made it possible plans to beat its rollout deadline with a little rock and roll.

The mobile operator said it expects to carry at least one exabyte of data over its network per year within three years, triple the amount of data the network carries today, and 16 times more than over the 3G network in 2012.

Video and social media now accounts for just over half of the data carried by EE's 4G network but the company predicts that new applications such as health monitoring will generate more traffic in future.

EE's own research found that more than one in four customers use some form of mobile health monitoring, from calorie counting to tracking blood pressure, and nearly 50 percent would happily conduct video consultations with GPs rather than visit the surgery in person.

Web browsing and email make up 30 percent of traffic, with social network usage accounting for another 23 percent, according to EE, driven by the ongoing popularity of selfie sharing.