6.3-ton satellite to fall from the sky Friday

Update: Nasa's UARS satellite is expected to fall back to Earth late Friday or early Saturday with a spectacular display.
Written by William Harwood, Contributor on Sept. 21, 2011 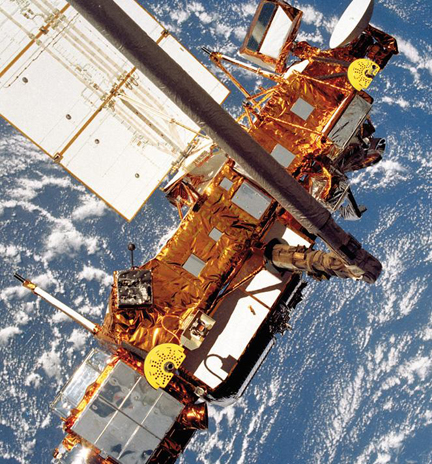 Update 9:19 a.m. PDT: NASA says that reentry of its UARS satellite is now expected late Friday, Sept. 3, or early Saturday morning, Sept. 4 EDT. A last minute change in its orientation makes it unlikely that it would hit the United States.

Even with last-minute updates from NASA and US Strategic Command pinpointing when and where the Upper Atmosphere Research (UARS) satellite will begin its final plunge into the Earth's atmosphere, the sheer size of the planet, with its vast stretches of ocean and remote terrain, means the odds of catching a glimpse — or of being anywhere near any falling debris — will be remote.

The UARS re-entry "is nothing to be particularly worried about, and if you're very lucky and in the right place at the right time, you may see quite a nice little fireworks show from it. But it's highly improbable that you'll get even that much out of it", said Ted Molczan, a well-known satellite watcher whose computer analysis and predictions have helped sophisticated hobbyists around the world track down spy satellites and other challenging targets.

The 6.3-ton UARS, launched from the space shuttle Discovery in 1991 and decommissioned in 2005, is expected to fall back into the dense lower atmosphere sometime on Friday. The bus-size spacecraft will tumble, break apart and mostly burn up on the way down. But a Nasa analysis using software designed to evaluate satellite decays indicates 26 chunks of debris, the largest weighing 330 pounds or so, likely will survive atmospheric friction to hit the ground somewhere along a 500-mile track downrange of the entry point.

For more on this story, read Spotting UARS re-entry will require patience -- and lots of luck on CBS News.

Did an SOS satellite icon just appear on your iPhone? Here's why