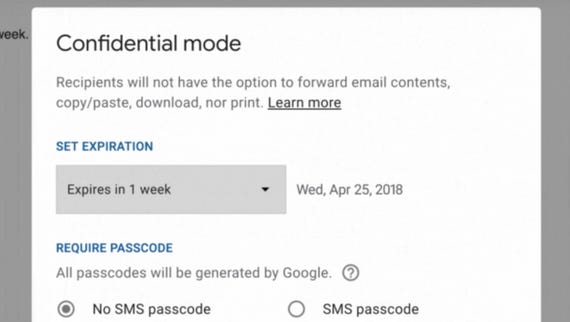 There's a lot of good stuff in Google's major Gmail update. These include high-priority notifications, confidential mode, and better offline support. The bad news is many of the best features aren't here yet. Here's what you can put to work now.

Smart Reply is a feature that's been available in the Gmail mobile version since 2017. Smart Reply works by using Google machine learning to suggest three responses to your emails. You can ignore them, pick one and hit send, or choose one and add additional text. The more you use it, the better the suggestions you'll get.

These tend to be generic replies such as "Thanks!" or "I'm working on it now". It's not much, but sometimes all you need is a quick, pithy reply.

Another new option is to snooze emails. This is another feature that Google has shown off before, having first appeared in the Google Inbox mobile app. With it, you can set a message so that it pops up later when you have time to deal with it.

This isn't just ignoring a message -- you and I can both do that without any help. Instead it hides the message in the "Snoozed" inbox until you're ready to deal with it. The message will return at the time designated when you snoozed it. Your default choices are tomorrow, next weekend, next week, or you can pick a specific time for it to pop up again. You can also choose to snooze until "someday", which means it's shoved into the Snooze mail box until you get around to looking at it again.

You can snooze a message from the message view panel or from the inbox. In either case, you select the snooze icon, which looks like a tiny analog clock face.

Finally, there's a new tool panel of three icons on the right side of Gmail's interface for easy access to the revamped Tasks, Keep, and Calendar. Google will also soon be including third-party "add-on" programs to this panel.

Tasks is a simple errand reminder program. You can use it for "Be sure to buy paper for the printer" or the like. You're also able to save an email as a task.

Keep is Google's answer to combination "post it notes" and serious research note-taking programs such as Evernote and OneNote. Finally, Calendar is Google's well-known calendar program. One quiet advantage to all this is you can now have all these programs on one tab for ease of use.

The new Gmail also includes improvements that are hidden until you need them. These include Nudging and new, more visible phishing and malware warnings about dodgy emails.

Nudging will bump important emails, which are older than two days, back to the top of your inbox. It also flags emails where you've asked someone a direction question, but they've never gotten back to you within three days. Gmail determines what's an important message based on machine learning models.

Another nice new feature is email attachments are now visible in the inbox as icons below the message. This way you can get to them without opening the email.

To get to all this, you need to switch over to the new Gmail. To do this with a personal Gmail account, go to Gmail and click the gear icon in the top right corner. Then, click on the option to "Try the new Gmail" at the top. If you don't see it, try again tomorrow. Google will be rolling it out to all its billion-plus users in the next few days.

If you're using Gmail via G Suite your administrator must turn it on via the Early Adopter Program by going to the Admin Console and enabling users to access the new Gmail.

Join Discussion for: ​How to make the most of the new Gmail