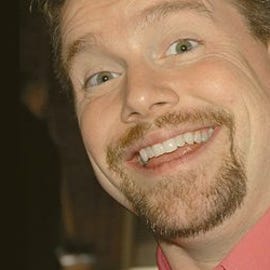 Christopher Dawson grew up in Seattle, back in the days of pre-antitrust Microsoft, coffeeshops owned by something other than Starbucks, and really loud, inarticulate music. He escaped to the right coast in the early 90's and received a deg…ree in Information Systems from Johns Hopkins University. While there, he began a career in health and educational information systems, with a focus on IT in public health. This focus led him to several positions at Johns Hopkins, a couple-year stint in private industry, 5 years teaching high school math and technology, 2 years as the technology director for his local school district, and 2 years as Vice President of Business Development for WIzIQ, a virtual classroom and learning network provider. Most recently, he has focused on writing, consulting, and advocacy around the smart use of technology in the classroom and education reform. A liberal dose of freelance writing about technology for SMBs helps pay the bills and support his growing hobby farm/soapbox for sustainable living and agriculture. He lives with his wife, five kids (yes, 5), 2 dogs, a flock of chickens, and a hateful cat in a small town in north-central Massachusetts.

October 12, 2010 by Christopher Dawson in Storage

Have I solved my Droid Incredible storage problem?

This past weekend, I wrote a post about a problem that my beloved Droid Incredible was experiencing.  It turns out that I wasn't alone in my issues surrounding bizarre memory errors (check out that last link for some good pictures of the error - thanks, WJD!

June 9, 2010 by Christopher Dawson in Storage

Is your Droid Incredible low on disk space?

Ack! I've been hit with the Low-on-space bug! And HTC doesn't have a clue what it is.

June 2, 2010 by Christopher Dawson in Storage

Yesterday, I asked for people to share their thoughts via a guest blog on virtualization in Ed Tech.   Guest blogger Erik Josowitz provided us with the following (thanks, Erik).  Feel free to talk back or submit your own guest blog with some specific experiences or implementation details. Virtualization is great tool but, like any Swiss-Army knife, success with it depends on the task at hand. One of the places that people get into trouble with virtualization is when they try to use out-of-the-box virtual infrastructure with non-technical audiences. Virtualization is a great solution but often is not a complete solution.In education we've frequently seen challenges that look like appropriate places to implement a virtualization solution, only to find that the end-result is not fully usable by the intended audience. One example is providing hands-on lab environments to support application training. Success in the workforce today depends on high-level application skills and there is no better way for students to attain those skills than through hands-on use of the software applications. Many educational institutions provide computer lab environments to help support their student population and provide access to necessary software applications. Many of these lab environments have become the source of IT management problems as they become virus-ridden, get subverted as distribution sites for pirated software or music, or just plain have the normal IT management issues associated with a shared resource in a public environment. For many institutions their student population brings with them their own PCs which solves one problem but creates another. The lab issues diminish but the problems of providing secure access to software (and software licenses) often takes its place.The answer, we've found, is virtual lab management - using virtualization to deliver secure computing environments as a shared resource. Virtual labs allow administrators to serve up a clean and unchangeable environment for each student - in the lab or on their own PC - on-demand. This makes it easy to provide access to applications that students either can't afford individually or that their home PCs cannot support. It makes it simple to track and monitor lab usage and to control the use of resources so that systems are not subverted into file servers. Virtual lab management sits on top of virtualization (from Microsoft or VMware) and tells it what to deliver and to who. It makes it easy for non-technical users to select the types of applications they need from a menu and to gain access to those environments without needing to understand virtualization, networking, hosts systems or anything about how it gets delivered. Best of all, virtual labs make it easy to manage capacity. By scheduling time in the lab environment the shared resource is managed for maximum utilization. If more capacity is needed it is simple to add additional resources to the system. The end-users simply see an increase in availability.Virtualization may not be a panacea for educational institutions, but for a subset of problems, a centralized virtual lab may enable technology administrators to focus their time and attention on enabling learning rather than administering systems.

December 19, 2007 by Christopher Dawson in Storage