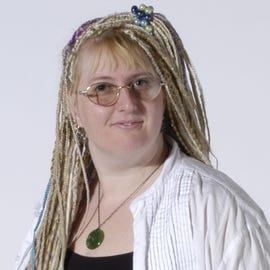 Mary Branscombe is a freelance tech journalist. Mary has been a technology writer for nearly two decades, covering everything from early versions of Windows and Office to the first smartphones, the arrival of the web and most things inbetwe…en.

Mary Branscombe has nothing to disclose.

Surface Pro 7+ for Business: Here's what makes it different

January 14, 2021 by Mary Branscombe in Hardware

The Infinity interchangeable magnetic cable supports USB-C Power Delivery up to 100W, but that doesn't mean you can just plug in and charge everything.

My Core i7 model is a little too toasty for the full getup but it looks fabulous in a Toast leather skin.

Listen up: Why Microsoft's Surface Headphones are a big deal

I got to try out the first pair of Surface Headphones to reach the UK. I'm impressed.

November 9, 2018 by Mary Branscombe in Hardware

Headphones: Finding the right kind of sound for your ears

February 14, 2018 by Mary Branscombe in Hardware

Does tailored audio sound better? It depends on your ears

April 4, 2017 by Mary Branscombe in Hardware