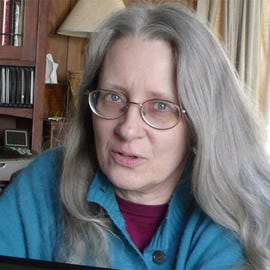 Wendy M. Grossman is a journalist, blogger, and folksinger. Her writing has been published in several newspapers, magazines, and specialized publications. She is the recipient of the 2013 Enigma Award for information security reporting.

Fujitsu Siemens’ P-series ultraportable notebooks tend to draw admiring comments -- even, as we found during this review, from seasoned technology reporters. P-series systems are comfortably small enough that when the person in front of you in economy class leans back, you don’t have to worry about the screen breaking. The latest in the line, the 1.1GHz ultra-low-voltage Pentium M-based P7010, has one of the sharpest, crispest LCD screens we’ve ever seen; it also packs an enormous amount into a very small space, including a CD-RW/DVD-ROM combo drive, slots for the three main types of flash memory cards, and 802.11b/g wireless networking. At £1,399 (ex. VAT) including upgrade options such as an 80GB hard disk and 512MB of RAM, the 1.3kg P7010 is extremely good value and gets a well-deserved Editors' Choice award.

CommuniGate Pro is a step up in terms of cost – it starts at $499 (~£310) for up to 50 users and five mailing lists. But it offers a working Web interface, so that remote users can log in via the Web from anywhere, as well as just about any forwarding or distribution option you could possibly want. It also runs on more than 30 different computing platforms, so it would be difficult to find a system that couldn't run it.

Like VPOP3, MailGate is a British product. Reasonably priced, lean and very stable, MailGate lets you collect email from multiple external accounts and distribute it appropriately according to whatever schedule you care to set.

VPOP3, a UK product from Paul Smith Computer Services, comes in two main versions: standard and Enterprise. The main difference between the two is that the Enterprise version accepts plug-ins that enable virus-scanning, content filtering and SMS messaging. In addition, the Enterprise version supports real-time blacklist checking to minimise spam, as well as IMAP4 and ODBC. Both are downloadable in 30-day trial versions. There’s also a simplified Home version with reduced business functionality (no listserver, external auto-responders, LAN forwarding and so on).

Setting up your own IRC server sounds like a geeky thing to do, but in fact there are good reasons why a small business or an individual who collaborates on projects might want to do so. In contrast to teleconferencing, you can easily tell who is speaking and log what they say for later review. It’s also extremely low-cost and accessible to even the slowest computers and Internet connections – or for that matter a mobile phone or handheld user.