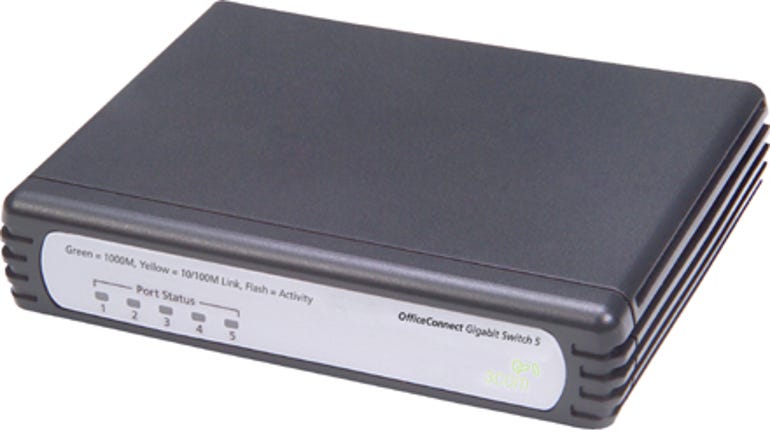 The 3Com OfficeConnect Gigabit Switch 5 is a tiny unit that compares well to the competition on price and power consumption.

Test Procedure
A switch is not something that easily "falls over". As a result little can be said about its effectiveness except to enumerate and comment on its qualities. The device should be easy to install and configure, and require little or no attention afterwards.

3com OfficeConnect Gigabit Switch 5
The OfficeConnect switch is tiny — about 11x8.5x2cm, which is not much bigger than its power supply. The casing is a charcoal grey that will blend into the shadows on or under a desk. Status lights appear at the front of the device with ports and power connector occurring on the rear face. Activity is indicated by flashing of the LEDs as expected with green indicating a gigabit connection and yellow indicating 10/100Mb connections.

Power usage of only 4W and an external power supply allows for the fan-less design, which in turn means that the device is silent and will make little impact on energy bills — of course, there is no room inside for a fan anyway. Adequate ventilation is provided through the side walls of the switch. Any port without a cable plugged in is automatically powered down.

Additional energy savings are achieved with what 3Com called the "latest" 65nm chip technology in documentation, which is claimed to reduce power consumption by 31 per cent. Meanwhile Intel is already producing chips with 45nm transistors and with hopes of releasing 32nm chips in 2009. Nonetheless 65nm technology is stunning; each transistor is roughly 120 atoms across!

Not surprisingly this machine is simple to set-up — there is nothing to configure. Find a suitable place for the switch then plug in the power and the network cables — job done. The OfficeConnect automatically senses whether cables are standard or crossover. Ports are full duplex, thus allowing up to 1Gbps each way simultaneously.

The following table compares the OfficeConnect with similarly featured products from other vendors. These all have 5x full-duplex gigabit ports. Most of these products — including the 3Com — also come in eight-port versions.


Verdict
The OfficeConnect from 3Com compares well to the competition on all counts. Pricing is similar to other brands and 3Com products are of good quality. Power consumption is better than all other devices considered apart from the D-link.

Overall, the OfficeConnect is an excellent product and is certainly worth considering when purchasing small desktop switches. In the case of device failure, 3Com offers next business day delivery for a replacement.