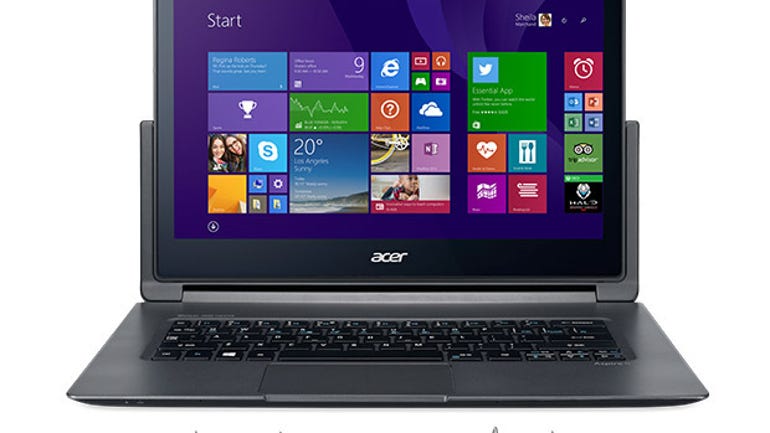 Convertible notebooks and ultrabooks are now widespread, and much is made of their multimodal configurations. Acer has trumped the crowd with its Aspire R13 and R14 models, which offer no fewer than six different orientations, each with a different suggested use. There's also a stylus for pen-based input.

Even with the lid down, it's obvious this isn't your standard ultrabook. The shiny black lid is considerably smaller than the base section, which gives this 13.3-inch notebook a larger desktop footprint than usual, stretching it out to 34.38cm wide and 23.04cm deep (we measured the lid at 32.4 x 21cm). That's a bigger footprint than our workaday Lenovo T440p, whose 14-inch screen sits in a chassis measuring 33.5cm by 22.91cm.

The reason for the mismatch between base and lid is the need to cater for Acer's Ezel Aero Hinge. Connecting to the two short sides of the display, it's this that enables the six notebook/tablet configurations.

At launch, Acer showed a WQHD (2,560-by-1,440 pixel) display, but our review sample offered a more mundane FHD (1,920 x 1,080). This is possibly no bad thing: higher resolutions on smaller screens don't necessarily make for better working conditions, serving up small menus and making both interaction and reading a challenge for some people (although zooming obviously helps). Sat on our desk, the FHD screen was easy to work with, if a bit too reflective for our taste.

As you turn the screen, the notebook automatically recognises what you are doing and changes orientation accordingly. If you use 'tent mode' in a portrait orientation (a seventh mode that Acer has omitted from its array) the screen obligingly reorients itself. As you change modes a notification appears on screen telling you what Acer thinks the mode is particularly good for.

The screen is locked in the outward facing position by a tiny raised edge (on what is the keyboard-facing side when used in standard laptop mode) hitting the frame that's formed around half its border by the hinges. There are no big design issue with this, and the look is subtle. And because it lacks a mechanical locking system, there's no chance of anything breaking over time.

Here's how the positions are described by Acer with some comments on what we found while using them:

Notebook mode We're all familiar with this one.

Ezel mode Swivel the display so that its bottom edge is closer to you than its top and pull the hinge between screen and keyboard to angle the screen towards you. This, says Acer, brings the display close for convenient reading and web browsing. We found this most convenient with the entire keyboard, but not the touchpad, covered by the screen, although you can use shallower angles if you wish. It's certainly workable, but we're not sure how often we'd use it

Stand mode Takes the Ezel mode to its maximum stretch, aligning the front of the screen with the front of the base section of the notebook. Acer says this is a good mode for working with the Acer Active Pen for drawing or writing. We found that if we exerted pressure towards the top of the screen the hinges had a tendency to buckle and the screen push flatter towards the keyboard section. It was fully sturdy if we put pressure towards the bottom of the screen. This is, of course, just a matter of physics and the fact that there are no locked positions for the screen, but it does make the mode less workable than it could be.

Pad mode The screen is flat on the keyboard and facing outwards ready for use as a tablet. The extra bezel around the screen created by the presence of the Ezel Aero Hinge is useful if you want to hold the Aspire R13 in one or two hands, although its 1.5kg weight makes it tiring to hold for long periods.

Tent mode Stand the Aspire R13 up on its front edges with the screen outermost and the keyboard on the inside back. According to Acer this is the ideal position when space is limited -- son an airplane's seatback tray, for example. It does save on desktop footprint, but it's not particularly sturdy for if you need to prod at the screen. We would certainly use it for video watching, though.

Display mode The screen faces outermost, with the keyboard flat on the desk and behind the screen. You can vary the angles here from a full 90 degrees down to 45 degrees or even shallower if need be. Acer says this is good for viewing photos and video or playing games with others.

We've used lots of notebooks with multimodal configurations and find some modes more useful than others. It's good to see manufacturers exploring ever more orientation modes, but you'll need to check that your particular favourites are not compromised in any way.

Despite indentations on the left and right sides, and a small lip in the middle of the front edge, it's not easy to lift the lid, and you'll probably need two hands. There's simply not enough indent on the lip to give a secure grip. Corning Gorilla Glass 3 provides a high level of protection against scratches -- and not only for the screen, but also for the outside of the lid.

Elsewhere, the chassis, although primarily made from plastic, is remarkably robust. There is some flex in the base section, but we had to apply quite a lot of pressure to make it apparent. The lid section is impressively rigid.

The keyboard benefits from a relatively subtle backlight and is comfortable to use. There are no dedicated Fn keys, and we didn't miss them: Fn key options sat happily on the number row and the QWERTY row. Our only real complaint is that we never got used to the Delete key being to the right of the space bar. The large touchpad will take the cursor fully across the screen in one sweep, multi-touch zooming is responsive, and the integrated buttons work efficiently.

The screen is touch-sensitive and can also be used with a provided pressure-sensitive stylus, the Acer Active Pen. Palm rejection support prevents accidental inking when resting your wrist on the screen while drawing or writing. Acer includes an app, Fresh Paint, which can be used for drawing tasks and shows off the pressure sensitivity very nicely in its handling of brushstrokes. Acer also includes its own Acer Hover Access software, which provides quick access to a range of features and apps via a menu that pops up if you hover the nib over the screen and press the stylus button.

Acer may have gained some brownie points by offering a stylus and relevant apps, but drops them almost immediately by making this an optional extra and by failing to provide a housing for it on the notebook. Indeed, ports and connectors are a little thin on the ground in general.

You get an HDMI port and two USB 3.0 connectors on the left edge along with a 3.5mm headset jack. On the right is a single USB 2.0 port, an SD card slot and the power input. The on/off switch is here too -- a convenient location for a notebook whose screen might obscure this button if it were near the keyboard. This is a minimal set of ports (there's no wired Ethernet, for example), although the Lenovo Yoga Pro 3 only has two USB 3.0 ports and micro-HDMI rather than a full sized HDMI port. For wireless connectivity there's 802.11 a/b/g/n/ac wi-fi and Bluetooth 4.0.

The processor is an Intel third-generation (Haswell) Core i5 i5-4210U ULV running at 1.7GHz, or up to 2.7GHz in Turbo Mode. It's no leading-edge CPU, but we found it to be perfectly capable. The GPU is Intel's integrated HD Graphics 4400 chipset.

There's only 4GB of RAM, but we're more concerned that the Aspire R13 comes with just 128GB of SSD storage. Especially since 35GB of this was already in use out of the box, leaving just 71GB of reported free space.

On its website Acer says the Aspire R13 delivers 'Cinematic surround sound' thanks to Dolby Digital Plus Home Theatre. We were very disappointed, given this description, to find the audio very trebly and rather uninspiring in quality. That said, it's loud enough for delivering multimedia presentations to small groups and good enough for video conferencing.

Acer quotes 8 hours of life for the non-removable 3,220mAh 4-cell Li-ion battery. During testing, we found it possible to get through a standard working day of document creation/editing, internet use and a little music and video without recourse to mains power. As ever, people's experiences will vary depending on their usage patterns.

Acer's latest take on multimodal computing is hard not to like, although few users will employ all of the usage modes. However, potential buyers should note the Aspire R13's limited SSD storage and sparse collection of ports, and the fact that the Acer Active Pen is only an optional extra.