X
Why you can trust ZDNET : ZDNET independently tests and researches products to bring you our best recommendations and advice. When you buy through our links, we may earn a commission. Our process 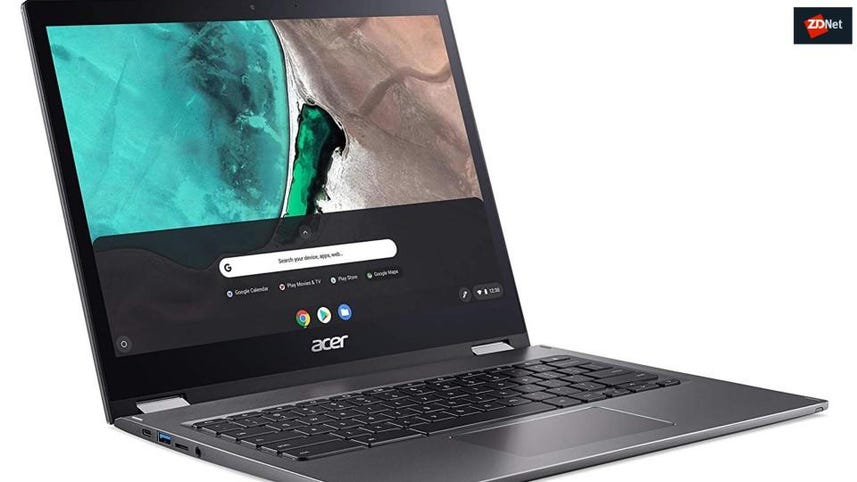 Acer tends to focus more on the consumer and education markets these days, and it produces an extensive range of Chromebook laptops for education users. But, as we've seen with the Chromebook 13, the company's high-end Chromebooks have a lot to offer business users as well — especially if you're looking for a more affordable alternative to Google's expensive Pixelbook.

At first glance, the Spin 13 looks very similar to the Chromebook 13 — and Acer's somewhat cavalier approach to its model numbering system doesn't help when you're browsing through the various models and configurations that are available. Closer examination does reveal some significant differences, however.

The Chromebook 13 has a fairly conventional clamshell laptop design, but the Spin 13 is a convertible 2-in-1 model, with a reversible screen that can fold back and be used as a stand for giving presentations or watching streaming video. The screen is also touch-sensitive, allowing you to use the Spin 13 as a large tablet when the screen is folded right back onto the keyboard — the keyboard is automatically deactivated in tablet mode, so you don't have to worry about pressing the keys by mistake.

There's a stylus included in the price as well, which slots into the base of the keyboard for safe-keeping when you're on the move. Acer pays nice attention to detail here, with a sensor inside the stylus holder that automatically launches the Notes app when you remove the stylus. The Notes app can be launched from the lock-screen as well, allowing you to quickly grab the device and jot down a few notes or doodles without having to log in with your password — you can't launch any other apps without logging in, so the worst security risk is that someone writes you a rude note.

The design and build quality of the Spin 13 are impressive for a device with a starting price of just £699.99 (inc. VAT; £583.33 ex. VAT, or $799.99). The silvery-grey aluminium casing looks smart and businesslike, and also feels very sturdy, so we wouldn't have any qualms about slipping it into a briefcase or backpack when it's time to hit the road. The edge-to-edge screen looks more elegant than the chunky metal border that surrounds the display of the Chromebook 13, and the scratch-resistant Gorilla Glass provides additional protection when you're travelling.

Many low-cost laptops compromise on display quality, but it's hard to fault the display on the Spin 13. The image is bright, sharp and colourful, and well suited to web browsing or even graphics and design work (a key target audience, if the tattooed hipsters adorning Acer's website are any indication). Viewing angles are good too, with the image remaining bright and clear right through Acer's quoted 178 degrees, so the Spin 13 will work well for on-the-road presentations or just leaning back and watching some streaming video.

The keyboard feels nice and firm, allowing you to type comfortably using productivity apps, such as the native version of Microsoft Office 365. It's well connected too, with its 802.11ac wi-fi and Bluetooth complemented by a pair of USB 3.1 ports, one USB 3.0, a slot for a MicroSD memory card, and a 3.5mm headphone socket.

If there's any minor sign of compromise it lies in the fact that the Spin 13 isn't the lightest or most compact laptop in this size category. The edge-to-edge glass of the Spin 13 does look more elegant than the rather old-fashioned metal border found on the display of the Chromebook 13, but the 13.5-inch viewing area does still have a quite large 'dead zone' border running around the edges. This makes it noticeably larger and heavier than rivals such as Apple's recently revamped MacBook Air, with the Spin 13 measuring 309mm wide, 246mm deep and 17mm thick, and weighing 1.5kg. In contrast, the MacBook Air boasts a more streamlined width of 304mm, depth of 212.4mm, and 15.6mm thickness, with a weight of just 1.25kg.

If truth be told, the Spin 13 does feel rather ungainly when held in the hands and used in its tablet mode — and you can't really hold it in one hand for any length of time either. Even so, it's still nice to have that tablet mode and the stylus available for writing and sketching with the Spin 13 resting on your lap or a table.

The dual-core Core i3-8130U processor in our review unit might seem relatively modest, but its 2.2GHz clock speed provides a Turbo Boost speed-bump to 3.4GHz. This achieved a quite respectable score of 245 when running the Chromebook CrxPRT benchmarks. That's a comparable score to that of the Core i5-based Chromebook 13 that we tested recently, and the Spin 13 felt smooth and responsive when used in both laptop and tablet modes, and should be more than adequate for running general productivity apps when you're on the move. And, of course, the Core i5 and Core i7 options are also available for more demanding tasks if required.

The Core i3 processor also helps to deliver impressive battery life. With its display set to (a still perfectly viewable) 50 percent brightness, the Spin 13 managed to last for 10.5 hours of streaming video using the BBC iPlayer, so it should certainly be able to see you through a full day's work, followed by a little off-duty web browsing as well. And, while there's a pair of rather large cooling vents on the base and rear edge of the unit, the Spin 13 ran admirably cool and quiet throughout several days of testing.

Chromebooks are still trying to find their niche in the Windows-dominated corporate world, but it's hard to deny the sheer value for money offered by devices such as the Spin 13. A Windows laptop offering this build quality and battery life at such a competitive price would fly off the shelves, and it's only the relative youth of the Chrome operating system and its reliance on online storage and connectivity that might give business users reason to think twice. But if you're simply looking for an affordable workhorse laptop that can handle web browsing and Microsoft Office all day long, then the convertible Spin 13 has a lot to offer.

Should you be scared of your laptop's webcam?
Pretty much every laptop – and for that matter, tablet and smartphone – has at least one camera fitted that's pointing at us all the time. But how worried should we be about eyes on us? Can the nefariously-minded switch them on to spy on us?

Instant Tethering expands to 15 Chromebooks and more than 30 Android phones
Using a Chromebook away from your home or office is now even easier thanks to expanded support for Instant Tethering. This functionality helps alleviate connectivity issues when no integrated LTE option is available.

Dell, Acer add new Chromebooks, Windows laptops to education offerings
Both PC makers are touting new Chromebooks that meet military standards for ruggedness, while covering their bases in the school market with a new Windows notebook.

The top 25 laptop battery life performers from CNET Labs
Forget screen size, processing power or number of ports. The first thing every laptop shopper should think about in a new purchase is battery life. After all, you don't want your PC shutting down in the middle of a Netflix binge or coffee shop brainstorming session.