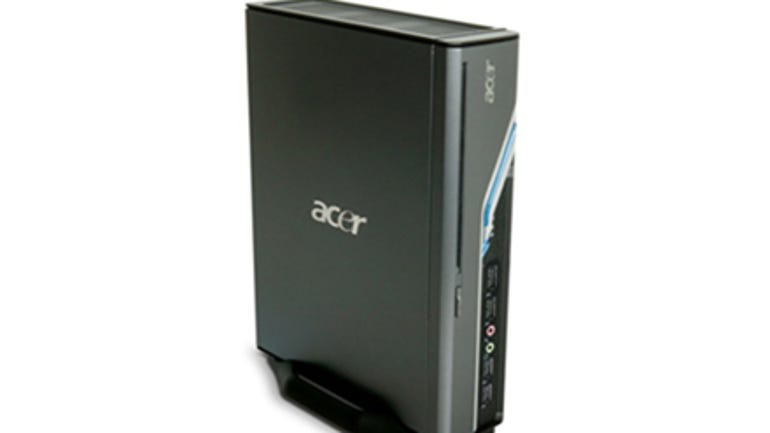 Acer's Veriton 1000 impresses with its quiet operation and sleek design and while it will easily knock over office tasks, expect to pay a premium for a small form factor.

Design and features
When first taking this desktop out of the box, for some reason it was immediately reminiscent of a dictionary. Its 250mm by 190mm by 19mm size is about the same size as a large hardcover book.

Right from the outset the Veriton 1000 comes across as a no-nonsense desktop. Its small size would make it ideal for an office or desk with limited space, or in a situation where you want the computer to be hidden from sight. Handy headphone and microphone inputs on the front of the machine means no reaching around the back of your PC.

The black Veriton 1000 given to ZDNet.com.au came with a plain black and grey Acer branded keyboard and mouse. The complete set would nicely suite Darth Vader's living room.

The Veriton 1000 also comes with an abundance of USB ports, four on the front and four on the back. In addition, there is a gigabyte Ethernet port, a VGA and DVI port and integrated 7.1 channel sound supplied via six rear-mounted jacks. The SuperMulti DVD RW optical drive is slot loaded, presumably to save space.

Our Veriton 1000 came with Windows XP Professional SP2. This is a bonus as Vista is both slower than XP, and business has been slow to deploy Vista due to a raft of issues that have been plaguing Microsoft's new OS.

The Veriton 1000 also comes with a bundle of additional software -- which with the exception of Acrobat Reader -- we found to be useless.

North Antivirus 2006 came pre-installed, which may have been useful except that the licence only lasts 90 days. Norton also harasses you continuously when you first boot up, which spoils an otherwise seamless five-minute set-up. In addition, it would be unusual to find a business network without some kind of pre-existing security software, so why include this in a corporate PC?

Other useless software includes the Yahoo Toolbar and Power DVD for watching DVD movies -- while some of this software might interest a home user, it seems superfluous in a corporate environment. You may find some use for the NTI DVD burning software.

The Veriton 1000 comes with a three year on-site warranty -- quite solid in our view.

The HDD included is a 160GB SATA II 7200 RPM, which should be plenty of space considering that the Veriton 1000 isn't designed for demanding video and image applications -- and with a 3DMark06 score of 235, you wouldn't want to try.

It is our view that you pay a premium for a small form-factor. For example, for only AU$200 more (prices may even have come down since the original review) you can get a Dell Vostro 200. The Vostro 200 has considerably more grunt, especially in 3D graphics performance, and comes with a 20-inch monitor and extra HDD.

Verdict
When we first unwrapped the Veriton 1000 we were impressed with its small, sleek design and quiet operation. However when using it an abundance of useless software spoilt the pie. Performance is solid for office tasks, and the eight USB ports will be handy.

If you're looking for a small, sleek office PC, the Veriton 1000 might be for you but it is our view that you pay a premium for the small form factor.