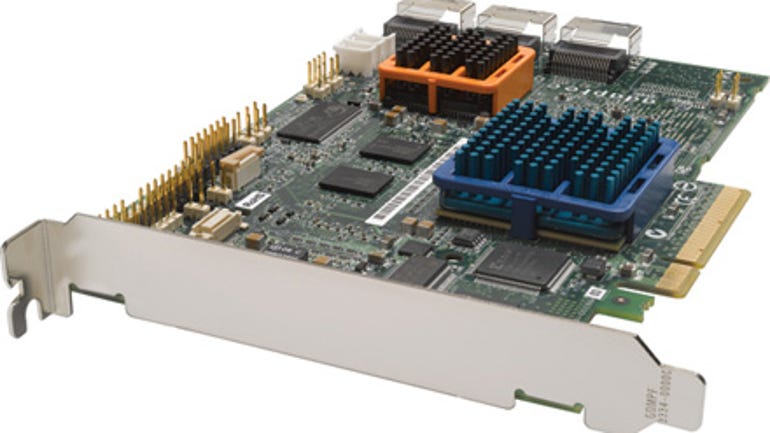 This controller is part of a large Adaptec PCIe family which includes controllers that can support four, eight, 12 and 16 disk drives. It is also features Adaptec's Unified Serial Architecture, a term used by Adaptec for controllers supporting both SATA and SAS disk drives.

These controllers would be predominately used for applications which require high levels of continued reads and writes and also where an existing SATA or SAS design is being used.

We received the RAID 31205 controller which is a 12 port controller and is comprised of three SAS connectors. Each connector can be attached to a fan out cable which can connect four SATA disk drives (below).

The card has 256MB of DDR2 RAM while a battery unit is optional. Having the battery option will insure no data is lost in cache even when the mains go out.

What's Inside
The 31205 controller works under Adaptec's Storage Manager. It's a Java-based application which has an intuitive user interface which gives you one view of all your Adaptec RAID products.

The Storage Manager is used to build a storage space for your data. Once you have installed this on your server you can group all your disk drives into logical drives. This is an easy process where you have two options to choose from: either a basic configuration which automatically creates the logical drives and assigns RAID levels bases on the number of physical drives; or there is the custom configuration where you can specify RAID levels, decide what the logical size will be and manually configure any advanced settings.

When the Adaptec Storage Manager is installed it also automatically installs an agent which is essentially a service that monitors and manages the system health and alerts you when errors occur on the system. You can also just run the agent without having to install the full Storage Manager -- you would do this if system resources are limited, as the agent uses less memory.

Below is a simple storage space we created using the single RAID controller and three disk drives. The disk drives were then built to RAID 5.

The big advantage with Storage Manager is that it will help you grow your storage space to consist of multiple RAID controllers, storage enclosures and disks which are in a number of different locations.

An impressive feature which can be upgraded with a feature key is the snapshot function which takes an image of a drive at a particular time which can then be copied to another drive.

Priced at AU$1,195 (inc. GST), the Adaptec RAID 31205 offers good value for companies wanting to use SATA or SAS drives in RAID configuration, as well as the flexibility to easily expand and manage their storage space from one centralised management console.