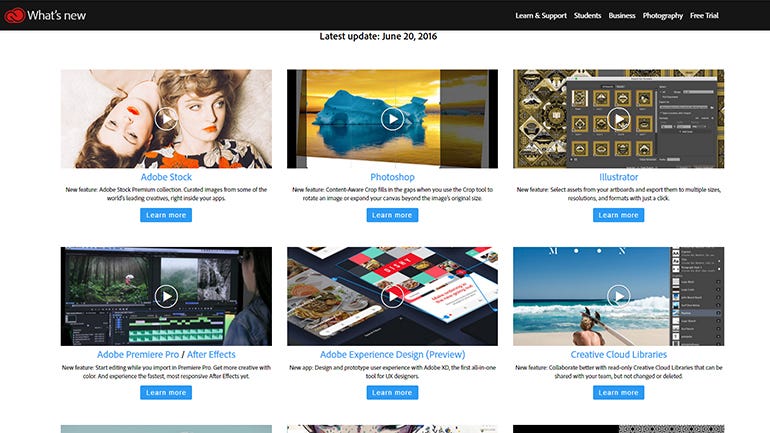 The most exciting of Adobe's new Creative Cloud tools is also very much still in preview, although you might have already seen it in action in the live broadcast of The Simpsons. The After Effects Character Animator lets you use a webcam for motion capture that drives the body and mouth movements of a digital puppet. You create the puppet in Photoshop or Illustrator, marking out the joints and sections of the puppet that will move, and then map those to the puppeteer sitting in front of the webcam. As the puppeteer moves and talks, the puppet moves and the mouth lip-syncs by changing to the right animated lip movements (known as visimes). You can add extra animations written in JavaScript that can be triggered during the performance. To make this work well, you need to label the individual sections of the face on the puppet.

Character Animator is still a little rough around the edges (it can't use 3D cameras like Kinect, for example), but it's adding new features quickly. It's not easy to set up to broadcast a live animation, but you can record multiple layers of a performance, taking the lipsync from one performance and the movement from another, to get the result you want.

Flash is also going back to its animation roots: the editing software is now called Animate, and that's what it produces. This release gets better import tools for PSD files, so you can open a Photoshop file with multiple layers and extract them as either an animation or individual objects. You can manually map different lip position visimes for a character by choosing from a list of thumbnails and syncing them to keyframes, to get the mouth movement that matches what the character is saying. And the canvas for animations is now responsive; you can drag it to make it bigger or smaller and the animation will resize to fit, so you can check how it will look on phones and tablets.

Even after so many years, Adobe also continues to add valuable new features to Photoshop. Previously, if you wanted to rotate a photo slightly to fix an off-kilter horizon or shift the aspect ratio, you would end up with gaps at the edge or corners of the photo, and you could either crop the image to cut them out or use the content-aware fill tools to fill them in by hand. The new Content-Aware Crop tool does all that automatically: you use the rotate handle to drag the image to angle you want or drag the crop handle or resize -- including making the image larger -- and it automatically fills in the missing areas based on nearby pixels.

This gave an excellent result on our test images of landscape photos (although it's not good on anything with an obvious pattern, like a patchwork quilt), and is far faster and easier than doing it by hand. When you do use the content-aware tools manually, we saw better results from the content-aware patch tool, which fills in a larger area of the image with a randomized pattern to avoid repeating elements that would make the patching obvious; previously the edges of patches could be blurred, but they're less obvious in this version.

The new face option in Photoshop's Liquefy filter is a pro graphics version of common consumer 'face fixing' photo tools. If it detects a face in the image it lets you tweak the size, angle and position of individual features like the eyes, nose and mouth and tweak the face shape.

This might prove controversial, as it's disturbingly easy to add a smile to someone's face when they weren't smiling and will make it easier for photos to be deceptive. But if you need to change an expression in the only photo you were able to get, you can get subtle effects with this -- as long as the tool finds the face automatically. It works best for faces directly facing the camera; photos of people looking down a little didn't show up as having a face we could alter.

The new Match Font tool is a very nice idea: it tries to identify the font used in text in a photo (you draw a box around the writing you want to match and it produces a list of fonts), including Typekit fonts for the web. It doesn't always get a particularly good match, even with printed text, and with hand-drawn or painted lettering, the suggestions can be hit and miss -- suggesting a sans serif font when you start with a serif font, or a monospaced font for something hand-drawn, for example. But getting a suggestion of a font that's vaguely similar is still useful, and this is a tool we expect to improve over time.

More immediately useful is the popup that appears when you select a character in a font that has alternate sets, showing the alternate glyphs for that character. This is a nice way to take advantage of the font alternates that you've paid for but that are too often hard to find. (And if you find it annoying, you can turn the popup off.)

Over the years, Photoshop has accumulated a lot of tools for selecting and masking areas of your image, all of which work slightly differently, and many of which are confusing for new users. Now they're all gathered into a new Select and Mask interface, with more options and a couple of new tools.

The new Refine edges tool lets you brush over the edge of a complex automatic selection -- like hair or fur -- and get a much more accurate selection around the fiddly edges. The 'decontaminate colours' option allows you to remove a coloured background that's bleeding into the edge of the selection -- a bright background behind someone's hair, for example. You can zoom in to take a sample of the background colour you need to remove. You can also drag the slider in the new interface to change how transparent or dark the selection mask is, or change the colour of the mask, to make it easier to see if your selection is getting the right areas. It's also easy to choose if the mask highlights the area you're selecting or the background you're cutting it out from, which makes it easier to see if you have the right area selected.

It will still take time to select a really complex edge, but it certainly makes it faster and easier than previous selection tools.

Faster and easier to organise

The more prosaic improvements are also very welcome. Adobe has been steadily improving the performance of all the Creative Cloud apps, and this time it's the turn of After Effects, which is noticeably faster. Photoshop is considerably bit faster at starting up and opening files, and we also noticed that some areas that tended to be slow -- opening the font menu, working with complex brushes, and some content-aware tools -- are speedier too.

The developers are also working their way through the interface in InDesign to update the panels and interface components for high-DPI and retina screens on modern PCs and Macs. The Creative Cloud libraries you use to sync assets between programs, devices and colleagues also get some much-needed improvements.

For one thing, you can finally set a shared library to be read only, so people don't accidentally change the master copies of logos, colour swatches, fonts and other design elements. The tools for that are hidden away on the tiny menu button for the Libraries pane; click it and choose Collaborate to open a web page to the Creative Cloud site where you can share the library by filling in email addresses. Can View or Can Edit options are available for each address, allowing you to create a library that contains your style guide and user interface kits with only the designer who owns the overall design able to update them.

You still can't organize libraries into nested folders -- Adobe says that's to keep things simple, but large libraries get unwieldy and it means designers often end up creating multiple libraries for a single project just to make it easy to find all the fonts or all the vector art. At least libraries are now sorted by asset type.

Searching is also more powerful, especially when you're looking at Stock images. Previously a search would only show a handful of results and send you to the Creative Cloud website to see more results; now you can scroll down through lots of results (around 45 or 50 for most of our test searches) inside the library panel.

Similarly, the swatches panel in InDesign now lets you sort both by name and by colour values. That's still a little limited -- if the colour model is RGB the swatches are sorted with the high red values first, and if it's CMYK they're sorted by the level of cyan. Still, it's better than having to drag them into order manually.

Interfaces are frequently designed in Illustrator, but getting assets out can be painful. The new export tool that appears on the menu is a definite improvement: the large dialog lets you choose your target system (like iOS or Android) and then automatically generates the correct sizes of assets in the right file types, giving you a package ready for a developer to work with.

Slowly but surely, Adobe is integrating the Stock image service it bought last year. Yet to come is the option to add your own images to Stock for sale directly from Photoshop and Lightroom (which will automatically tag images using image recognition), and the contributor panel that will show you the status of the images you've added to Stock. But getting images into Creative Cloud applications is easier in this version.

The ability to select an image on the Adobe Stock website and send it straight to Illustrator or Photoshop to work with -- and even to choose to licence the image immediately rather than doing that later -- is a much simpler workflow than having to add the image to a library and then open it from the library. It would be nice if the Stock image automatically resized itself to fit a selection on the canvas rather than opening at full size though.

If you didn't licence an image on the Stock website, you can select it in your workspace in both Illustrator and InDesign and click on the licence widget to see what licence you need. You can then click through to licence it straight away, removing the watermark without losing any of the work you've already done. You can also licence images straight from a CC library, which can be an easier way to work with video clips and images in Photoshop layers, and is also a handy way to work through all the assets you need to licence once the design has been approved. A nice touch in Premiere Pro is that if you've licensed the 4K version of a video, you can flip back to using the low-resolution version for your edits to stop your system from slowing down, and have all your changes applied to the high-resolution version when you complete the project.