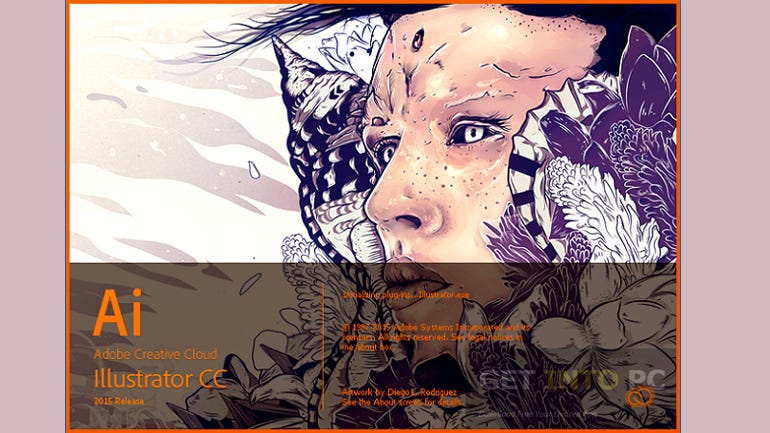 The 2015 version of Illustrator CC shares the common cloud improvements with Adobe's other Creative Cloud apps: you have the same cloud-synced libraries and access to Adobe Stock as in Photoshop CC (in fact libraries sync between Photoshop, Illustrator and InDesign). There are also more fundamental performance and feature improvements to this veteran vector graphics application.

Of all the programs in Creative Cloud, Illustrator might have the biggest performance bump this time around. It's the last of the Creative Cloud apps to get Adobe's Mercury engine, which uses your GPU to accelerate common actions. The difference when you're zooming, panning and scrolling in large files with lots of paths and vector shapes is significant. On a recent notebook, even with Intel integrated graphics, we were able to zoom in and out of very large files pretty much in real time, rather than having to wait for the image to redraw. That's even more welcome now you can zoom in to 64,000%, allowing you to reveal the tiniest details.

Also welcome is the crash recovery (in fact, it's surprising that Illustrator hasn't had this before): files finally get auto-saved, and you can choose how often that happens -- or turn it off if your document is so large that saving slows you down. If Illustrator crashes, the auto-saved version of your file will load automatically. Depending on the reason for the crash, you might get the option to start the Diagnostics tool, which checks for problems with drivers, plug-ins and fonts. If it finds any, Illustrator starts in safe mode with a list of possible problems and tips for fixing them.

With so many Windows notebooks having touchscreens, and so many creative professionals adopting Microsoft Surface Pro, it's nice to see Illustrator detecting touch devices and popping up a dialogue to switch to touch mode. This provides a simplified interface with controls big enough to touch easily with your fingers, including an icon that appears whenever you select an object that lets you use the context menu without press and hold.

There's a lot missing in touch mode, though: it's limited to what Adobe thinks is useful when you're working with your fingers, which doesn't include libraries but does include an obvious button to switch back to the normal interface. There are a few more tools in this version: you can place raster images; you can distribute selected objects to align them; and you can flip the direction of variable strokes on a path (so they can go from thin to thick or thick to thin rather than always running in the same direction, making them look more like a real drawing).

Illustrator's chart feature hasn't had a major update in a very long time. Now the familiar keyboard shortcut brings up a preview of what will evolve into a much more powerful charting tool that's ideal for building infographics and very visual charts. Creative Cloud Charts is currently fairly basic, and as the name suggests you have to do most of the editing of the chart in the cloud. That means your workflow is to insert a chart, pick the Scale by Value chart (the only working option except a basic bar chart), then click Edit on Creative Cloud to open a browser window where you can put in the values for your chart and pick the options, like the direction of the data and whether the chart is locked together or broken up into pieces you can drag around. You have to go to the web to change options like the spacing and alignment; the only thing you can do in Illustrator itself is to pick the colours for different elements in the chart and replace the artwork.

The Scale by Value chart is ideal for infographics: you can drag any piece of vector art on top of the chart to use that as the graph element, whereupon Illustrator automatically scales it to fit the different values. Charts are automatically saved as linked assets that sync with the rest of your libraries so they're easy to reuse in different designs.

Even as a preview this is useful, and these would be fantastic features if they were inside Illustrator. Perhaps Adobe will move them into the interface once the preview is further along -- the preview will last about a year. At the moment, you have to juggle the Illustrator and browser windows on-screen, which can be fiddly. For the full range of chart options, you right-click on the CC Chart tool to get the familiar Illustrator chart tools instead.

Touch mode isn't the only way Illustrator supports tablets: there's a range of mobile apps that let you sketch, draw and photograph assets you want to use in Illustrator. Color extracts the colour palette from a photo; Brush CC lets you turn photos into brushes that will work in Illustrator; and Shape CC lets you draw on a photo to select a shape you want to turn into a vector image. These all run on iOS and Android; Illustrator Draw (a sketching tool) and Comp CC are iOS only.

Comp CC is particularly useful for designing layouts. Pick a screen size template and start drawing the boxes for a wireframe -- Comp turns your scribbles into neat boxes, and there are gestures for drawing not just shapes (including rounded and chamfered boxes) but specific components like images, headlines, and lists. You can also add images from your Creative Cloud libraries or drop in lorem ipsum as well as typing your own text. The main flaw is that layouts don't automatically save to Creative Cloud, ready to pull into Illustrator to do the real work -- you have to remember to send them there.

With powerful, mature apps like Illustrator, extending your workflow with the cloud and mobile devices can be a more significant improvement than extra options and tweaks to the tools in the main program. The performance improvements are very welcome, the auto-save option is something many designers have asked for. And the new chart tool shows promise, although -- as with the rest of Creative Cloud -- it's the continuing updates that will really matter. Again, this is Adobe using the freedom brought by its subscription model to release useful improvements without having to wait until the list is significant enough to convince someone who would have to pay for an upgrade.