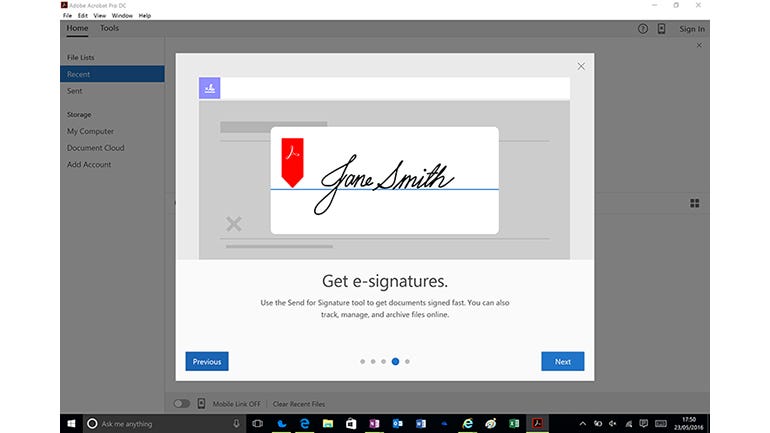 The latest update to Adobe's Document Cloud adds new features to the cloud-based digital signature service you may already be using: what was EchoSign is now Adobe Sign, and it's getting more options and better integration.

The iOS and Android apps for signing documents are renamed to Adobe Sign too (which is certainly clearer than Adobe eSign Manager DC), and the Acrobat PDF applications have much simpler integration with Sign -- you can tag a signature field in a form with the email address of the person who needs to sign it, and when you click the Send for Signature tool in Acrobat, that will be the email the form gets sent to. For businesses, Adobe Acrobat DC is now part of Creative Cloud for Enterprise rather than a separate installation.

You can send files directly from the Adobe Sign website, or you can send files to be signed from the Sign mobile apps, or from Acrobat DC on Windows or Mac, adding a block where you want people to sign. That still uses the Adobe Sign service, but you don't have to go to the website unless you want to see how far the document has got through the list of people who need to sign. Acrobat also includes an Office plugin that lets you send a document for signing from Word or PowerPoint.

As well as files you've stored in Adobe's cloud, you can now open PDFs stored in OneDrive (business and consumer versions) and Box directly in Acrobat to send them off to be signed; you can also autoarchive signed documents to Box, Evernote or an email address. The iOS Android Reader app can now open PDFs directly from OneDrive, while the Adobe Sign apps and website let you open PDFs from Box as well as Adobe's cloud store and the cloud services like Dropbox and Google Drive that were already integrated. That's not quite the 'open a PDF from any cloud service in any of the Adobe document apps' that we'd like to see, but it's handy if the cloud service you need is integrated -- and Adobe suggests more integrations might be on the way.

The mobile Sign apps are quite a bit slicker than before, with a full range of options such as picking what kind of ID verification you want for each signature and whether a signature can be delegated; you can even choose what order different people need to sign in if there's a workflow. There's also a handy option where you can hand your phone or tablet to someone so they can sign a document on-screen instead of waiting for you to send it.

Enterprise customers can get alerts at every stage of the document's journey, either as emails or as 'events' that show up in the dashboard on the Adobe Sign website. That can be quite a lot of notifications, so you can customise your alerts using the Settings area on the website. You can also have different settings for documents sent directly to you and accounts that share information with you -- the head of the contracts team might need to keep an eye on all the contracts being signed, for example, even when they're not signing themselves. It's not uncommon for executives to delegate signing documents to an assistant, and you can set that up directly in on the Sign website as well.

Documents arrive for signing by email (although you'll also see them listed in the dashboard on the Adobe Sign website). We're getting used to signing for credit card payments on phone screens and iPads using our fingers, and if you sign a document on a phone or tablet you can get a signature that looks something like your own writing. If you're signing on a PC with no pen or touchscreen, Sign can create a signature in an unusually tidy script font, using a different font for each person signing (and yes, it's still a legal signature), but if you prefer to have a signature you'll immediately recognise when you look at a document later, you can scan in both your signature and your initials (or sign on a PC with a touchscreen or pen and save the signature to use next time). There isn't a way to smooth the rather jagged signatures you can get on some phone screens, although Adobe says it's working on that for a future release.

If you're the one sending out documents for signing, you have some choice over how signatures will be formatted; you can choose what's in the signature block you put in a form, and you can tell Sign to automatically add the date and a text version of the signer's name, and even their job title. You can block handwritten signatures (those neater script fonts are easier to read, even if they're less personal), and you can require biometric signatures (so the signer has to use a fingerprint reader, facial or eye recognition or other biometrics to validate the signature), or send a one-time code to their phone to type in (there's an extra charge for this service). Just as important, you can force people to give a reason when they say they're declining to sign a document. That's part of how Adobe Sign complies with eIDAS, the new EU signature regulations that come into force this July (businesses can also choose to have Sign keep their documents in EU data centres). For less legally binding documents, you can still get people to sign in with a Facebook or LinkedIn account so you can get more details about them. And for bulk mailing, you can create a master document that gets merged into multiple customised forms for each person signing.

The Sign service lets enterprises built a workflow around forms, like triggering an invoice when a contract is signed. You can take this further if you use services like Salesforce, Workday, Dynamics and Adobe's own Marketing Cloud, which integrate with the Sign service. You can integrate sending documents for signature into a process you manage in Salesforce, and you can use the new Salesforce Lightning tools for making custom apps that include document signing. If you don't use Salesforce, you can also use the Sign service through REST APIs.

With Marketing Cloud, companies can use Sign to create online sign-up systems for things that need a legal signature, like credit card applications, and track customer progress; custom apps can use the phone camera to take a picture of government-issued ID like a driving licence and extract the information to fill in the form, as well as including the photo in the application so you can check the ID through your usual processes. Adobe's research suggests that as many as three-quarters of forms get abandoned; not only does letting people sign on their devices keep the whole process digital (you lose a lot of customers if they have to print out and fill in a paper form), but the Marketing Cloud integration lets you do A/B testing to see if you can improve the design of your forms to get more people to fill them in and send them off.

The Sign apps make it a lot easier to deal with forms that need a signature -- even if they're on paper, because you can take a photo and then sign them on-screen -- and the latest versions are definitely easier to work with. For large businesses, the integration features may be the most interesting, allowing them to digitise some customer processes that have so far remained stubbornly paper-based.