AirBar touchscreen Mac accessory: Exciting but not for the enterprise 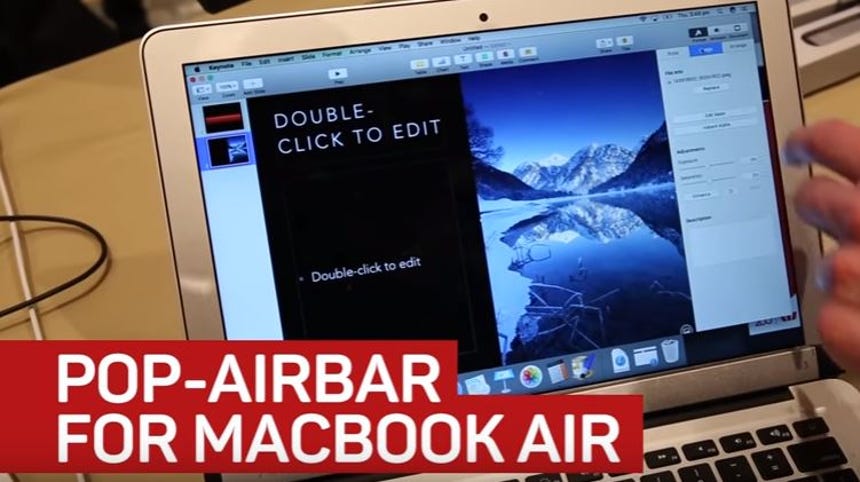 While companies including Microsoft and Samsung are working steadily to enhance the touchscreen capabilities for your electronics, Apple says it has no plans to introduce such technology into future MacBook products.

According to Apple marketing chief Phil Schiller, the idea is "absurd," and touchscreen functionality would ruin the experience for those using a pointer or mouse.

However, Neonode appears to disagree and has focused on developing touchscreen accessories for both Windows and Mac machines.

The AirBar, originally designed for Microsoft Windows 10 laptops, has now been released for the MacBook 13.3-inch model, although there are plans to develop variations for other MacBook models.

The device is a thin aluminium strip with a USB connector on the right side. At the back, there are two small magnets which help to keep the bar in place. To use, all you need to do is stick the magnets to the bottom of your screen, connect the AirBar cable to the USB port on your MacBook, and line up the AirBar on the MacBook Air's bezel with help from two small markers inscribed on the gadget's front panel.

There is no need to download software or additional drivers for basic, single-touch use. The AirBar is plug-and-play by default, but you can download an additional driver to add multi-touch support. You will need to give AirBar control over your MacBook Air's controls under the Accessibility tab.

The sensor bar, available in silver or black, works via infrared technology. The AirBar emits a light field projected onto the MacBook Air screen which senses movement from fingers or a stylus. Users can swipe left or right, tap, or pinch to click, zoom, or scroll.

During testing, I tried out the AirBar surfing on Chrome, playing around with Google Maps and swiping through image collections. For the most part, the AirBar was responsive and correctly recognized my gestures.

I enjoyed the novelty factor of having touchscreen capabilities on my MacBook Air, which I generally reserve for traveling and simple tasks such as reading articles, watching YouTube videos and listening to my iTunes library.

For these kinds of tasks, in general, the AirBar is a nice little accessory which made shifting through songs and web pages quicker and more convenient.

Downloading the multi-touch drivers made the functionality better and appeared to marginally improve gesture recognition.

Sadly, the AirBar is not always consistent. The device would be working perfectly in one moment and would, for example, accept a tap to change a song, but in the next, would stop recognizing anything completely and would go haywire -- opening and selecting random tabs and disrupting the task at hand.

In the same way, in Safari, you would think swiping backwards would take you back to a former web page. Nothing happened -- but for some reason, this gesture and rollback request did work in Chrome.

When I tried out the AirBar with a stylus, accuracy did improve but this does limit the gesture control options available.

You have to keep in mind this is a bolt-on accessory to add touch capabilities rather than an Apple development and so you cannot expect 100 percent perfection in responses and gesture recognition. Despite the lack of consistency, it is still a fun accessory, especially if you use your MacBook Air for photos, watching videos and simple tasks that you may otherwise reserve a tablet for.

Out of curiosity, I did try out the device with my 2015 13.3" MacBook Pro without downloading additional drivers. The AirBar is not designed for this model but I did find that it performed almost as well -- the only barrier being the difference in size causing half the bottom menu bar to become covered. However, for some applications, this might not be a problem should users be willing to use the standard touchpad to access this menu in a pinch.

It's an interesting and rather exciting gadget, and I look forward to seeing if future firmware updates will improve the consistency of the controls. The AirBar does have the potential to become a go-to device to transform the way we control our MacBooks, but it has a way to go.

I wouldn't purchase the $99 gadget if I wanted to rely on touchscreen controls too much or for any kind of professional use, but it is a fun way to control your MacBook Air. Despite some hiccups, the AirBar has convinced me that Apple may be missing a trick by refusing to consider such technology for future Mac models.