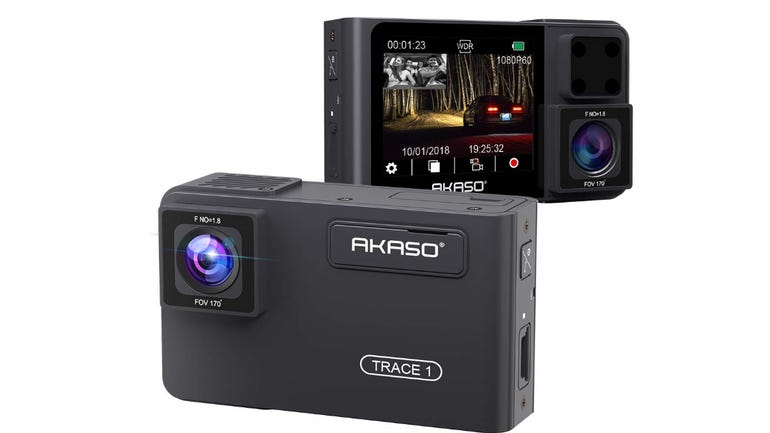 The Akaso Trace 1 camera is a nice light compact camera with simple controls and an added bonus. This dash cam has two cameras – one facing forward, and one that will record everything going on inside the car.

Setting up the camera is straight forward. There is no app to configure to set up the camera – just a set of simple controls. The on screen display corresponds to clickable buttons at the bottom of the camera to set recording, language, date and time, screen save, and dual camera display.

You can set the video to loop every one, three or five minutes, and set dual camera display on the screen. There is also a setting to record audio, and Wide Dynamic Range

The body of the dash cam is small – 3.19 x 1.81 x 0.94 inches, it weighs under 2 ounces (53g) and it sits unobtrusively on the screen. If you want to use both cameras, be sure to place the camera so it is not blocked by the sun visor or rear-view mirror.

This camera does not have a hard wiring option – but plugs into the cigarette lighter. The 240mAh battery will work for around 20 minutes on a full charge, but You need to use the power cable for continuous recording.

You will also need a MicroSD card of up to 128gb in size for this camera.

The integrated G-sensor automatically activates the emergency recording to store and lock the segment. The parking monitor records incidents when you park. It does not record incidents that happen when you are away from the car.

In low light conditions, or at night, the Sony Starvis camera records images well and automatically activates when the light gets dim.

I found this camera particularly useful in displaying what was going on in the back seat whilst I was driving. I positioned the camera on the screen so I could see exactly what was going on behind - and to the side of me.These guys knew they were being recorded by the way. 😊

Audio was crisp and clear – and would be really useful for cab drivers who had issues with recalcitrant passengers.  I also loved the fact that the parking recording showed the parked car and what was going on, for 20 minutes after I left the car.

The internal image was clear – and the recording outside the car at the back was crisp and good quality with great audio quality. Due to the wide field of vision, there is some lensing of each recording – but this is to be expected.

The only issue I had was when I initially tried to position the camera in the car. The power cable has a 90 degree angle that means it hits the suction cup if you angle the camera too far.

Perhaps the power cable could be situated on the side of the device which would prevent this happening – but might be more intrusive visually.

All in all, this is a nice unobtrusive good quality camera, at a reasonable cost.

There is a time limited 20 percent discount if you use Code:S3C4SAOW on its Amazon page. But for under $100 this camera is good for your peace of mind – especially if there could be issues in the back seat behind you.