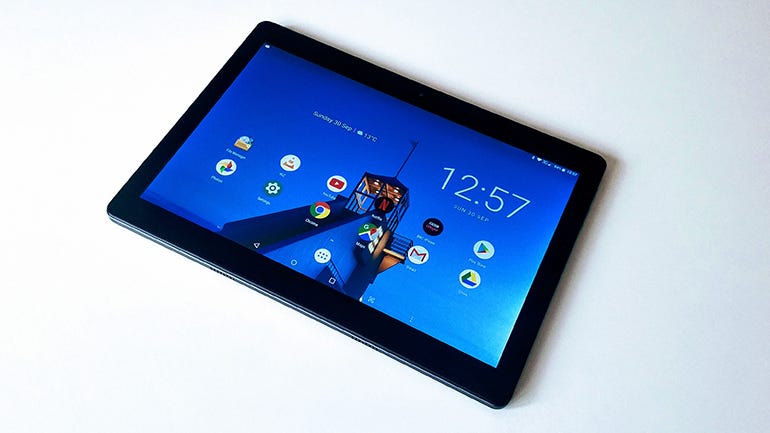 It's almost seven years since the first bona fide Android tablet -- Motorola's Xoom -- hit the shelves. I seem to recall saying at the time that 10-inch tablets would soon be ubiquitous. How wrong can a man be?

Today even Apple is struggling to maintain iPad sales, while Samsung and Huawei are the only companies still making quality large Android tablets, although selling perilously few. Amazon does OK with its budget Fire tablets, but bargain-basement hardware and a custom version of Android mean that they only really make sense for Amazon media consumption.

If you still want a large but affordable Android slate there are some half-decent options shipping from China. The latest, and one of the cheapest, is the M5S from Alldocube, which is available from AliExpress.

I've no issue with those cut corners. The missing 1GB of RAM doesn't noticeably hinder the MediaTek MT6797 deca-core CPU or the Mali T880 GPU, while the Amazon Fire HD 10-matching 224dpi is more than sufficient resolution for a 10-inch tablet. If 32GB sounds restrictive, the MicroSD card slot is good for another 128GB.

The display does suffer a bit from not being fully laminated, which makes it look like it's set a few millimetres below the glass cover. It's not a very bright display, but being an IPS panel viewing angles are decently wide and the colour saturation isn't bad either.

It's not clear what sort of glass the screen is made from, but it seemed resilient enough to scratching. As you can see in the images, the bezels are a little on the thick side, although they're no worse than the Amazon Fire HD 10.

Being a wholly glass-and-metal unibody affair, the M5S looks and feels a far higher-quality product than the ticket price suggests. In fact, the black and grey colour scheme makes the cheaper M5S look more expensive than the all-white M5.

The power and volume buttons on the right-hand side are plastic but pleasant to the touch, and the action feels solid enough. The clip-on cover for the storage and SIM cards looks and feels a bit clumsy, but does the job and never comes loose.

The size and weight of the M5S are unremarkable: 510g and 241.3mm by 171.7mm by 8.7mm are par for the course. Those numbers are the same as the M5, but thankfully Alldocube has made one change.

The disappointing loudspeakers fitted in the sides of the M5 have been moved to the bottom and, I suspect, upgraded. The M5S sounds much better: there's more volume, more bass and no loss of composure even when maxed out.

What makes the M5S unusually good value are the two Micro-SIM slots that both support 4G LTE bands 1-3, 5, 7, 8, 20 and 40 (so that's all UK telcos covered). It even comes fitted with a fully functional phone dialler and SMS app. More practically, because of the SIM slots you can run messaging apps like WhatsApp on the M5S.

Thanks to its GPS receiver the M5S can serve as a ridiculously large sat-nav as well as an unfeasibly large mobile phone. The wi-fi radio is dual-band 802.11ac working on both the 2.4GHz and 5GHz wavelengths, but there's no NFC chip.

Physical connectivity is limited to a 3.5mm audio jack and a Micro-USB port -- USB-C was always going to be a long shot at this price level. Both ports are on the top (when held in portrait orientation), making them easy to access when you have the M5S in a keyboard stand like my trusty Logitech K480.

The M5S runs Android 8 Oreo in a completely stock form with no added OEM apps other than a file manager. That's the good news. The bad is that, being from a small Chinese maker and running on a MediaTek chipset, you're unlikely to see Android 9 Pie coming your way.

Alldocube reckons that the 6,600mAh battery is good for six hours of video, five of gaming or twenty of music playback, and I wouldn't argue with those claims. A Better Call Saul marathon on Netflix drained the battery in 5 hours 45 minutes. That's not bad -- a handy side effect of that reduced resolution and rather low maximum brightness.

Of course those numbers only apply when the SIM slots are empty. If you have two active cards in play, then the battery life takes about a twenty percent hit. You can disable one or both SIM cards from within the settings menu to conserve power.

There's no fast-charge facility so the bundled 2-amp charger takes a good two hours to fully charge the battery.

The cameras -- 5MP on the back, 2MP on the front -- are pretty poor affairs, which will probably come as no surprise. Images and videos are dull, grainy and seldom wholly in focus. Think the cameras from a cheap smartphone from circa 2012 and you get the idea.

The M5S's chipset is no thoroughbred, but it still manages to keep everything moving along fluidly. The AnTuTu benchmark app scored just below 98,000 which is perfectly decent.

I wouldn't describe the M5S as a gaming machine (although Alldocube does, using the marketing strapline of 'Cost-effective Gaming Tablet'), but Modern Combat 5 ran smoothly at 30fps and even PUBG was playable with the graphics knocked back a bit.

For this sort of money, what more do you expect?

The best tablets for 2018: Our top picks
Tablet sales may be declining, but there are still plenty of viable use cases and many models to choose from. Here's our pick of the best.

Google's Pixel Slate problem: The Android apps are awful
The new Chrome OS-based tablet convertible seems like a good buy at $600. But the lack of good apps makes it a problematic purchase.

Alcatel 3T 8 launches as T-Mobile's first 600MHz tablet on Oct. 12 for just $150
Alcatel's new Android tablet is focused on serving as a family-friendly tablet with a compelling price. It launches with the latest version of Android and a whole lot more.

Here's the next iPad Pro Apple should build: Specs and speculation
Apple's third-generation iPad Pro is likely to have important but incremental improvements over its predecessor and include technologies introduced in the iPhone X.

Lenovo introduces five new Android tablets, starting at $70 (TechRepublic)
Lenovo doubles down on the declining tablet market, with a bevy of new models that range from dirt cheap to a premium entertainment slate.