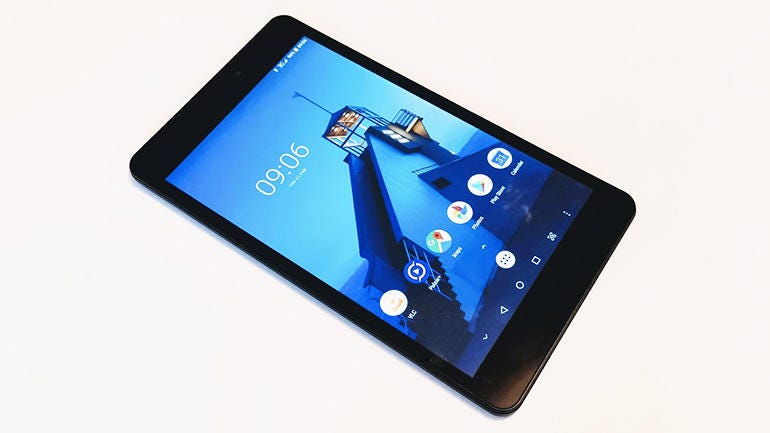 In a world where many smartphones pack displays measuring upwards of 6.2 inches, is there any need for 7 or 8-inch tablets? Judging by the ever-declining sales of these devices, I suspect not. But what if you really do want one?

Amazon will sell you a Fire 8 tablet for £80 (or $80), but the specifications are pretty bargain basement and Amazon's fork of Android leaves much to be desired. Huawei's MediaPad M3 8 is a decent enough device, but at £180 it's hardly cheap. The cheapest iPad mini is now an eye-watering £400.

A better bet may be something from China. You'll probably have never heard of the maker, but at least you won't be paying for the name. And you might get a much higher on-paper specification for your money.

Regular readers will recall that we've recently tested both the Alldocube M5S and X 10-inch tablets and come away pretty impressed. Alldocube is one of the Middle Kingdom's more reliable small gadget makers.

Physically the M8 is a rather anonymous black slab with fairly substantial bezels above and below the screen and plastic power and volume buttons placed just a little too far up on the right hand side. The USB port and 3.5mm audio in/out jack are both on the top edge, which works for me.

At 123mm wide 215mm deep by 8.5mm thick and weighing 345g, the M8 is perfectly handy, although the matte-finish metal back panel does show up greasy fingerprints.

The build quality is good, and the M8 feels very solid and well put together. On the whole, I reckon the look and feel of the M8 suggests a higher ticket price.

Fire up the M8 and the first thing you notice is that the display isn't fully laminated. You can clearly see that it's set about 1mm below the glass screen rather than bonded directly to it. This can sometimes cause unwanted reflections.

It's a failing to be expected at the price point, along with the absence of an HDMI port and the use of a Micro-USB rather than a USB-C port

Lamination aside, the 1,920-by-1,200-pixel IPS display is sharp (285dpi) and bright enough to satisfy most users (305cd/m2 maximum by my measurements) and colours are well balanced. Viewing angles are pretty broad, too.

My review unit arrived with a pre-applied screen protector, which I immediately removed. I've no idea what sort of glass the M8's screen is made from, but it seems to be scratch resistant. It has an oleophobic coating, too.

Storage at 32GB is no more than adequate, but if you need more there's a MicroSD card slot that supports cards up to 128GB.

Unusually for a cheap 8-inch tablet, as well as dual-band wi-fi you also get two Cat. 6 4G-capable SIM card slots supporting bands 1,2,3,5,7,8 and 20. This is a major potential selling point for the M8.

Those SIM slots mean the M8 can function as a fully fledged smartphone with the capacity to make calls, send texts and WhatsApp messages as well as consume data when you're away from a wi-fi link. There's no earpiece, so making a call involves using the speaker or, if you value your privacy, a headset.

There's a GPS radio too, so you can press the M8 into service as a large-screen satnav if need be.

The M8 runs Android 8 in stock form, which is a big plus. Will it get updated to v9? I doubt it. The most recent security patch for the M8 shows as February 5 2018, and I wouldn't bet on that getting updated. Still, I know of major OEMs who do no better when it comes to supporting their Android tablets.

The MediaTeK Helio X27 (MT6797X) chipset features a deca-core CPU, MALI T880-MP4 GPU and 3GB of RAM. That's enough to keep Android skipping along nicely, although things can get a bit choppy when running graphically demanding games like Shadowgun Legends, which is only playable if you knock the settings back.

Running the AnTuTu benchmark returned an average score of just over 105,500, which was pretty much what I expected from this chipset.

The 5,500 mAh battery inside the M8 has a larger capacity than most 8-inch Android tablets, and with just the wi-fi radio on you can easily get nine hours of screen-on time from a full charge.

Battery life will suffer if you run either or both of the 4G SIMs: with both SIMs active and streaming video, the battery life dropped to 7 hours. (You can disable the SIMs in the settings menu if they're not needed.)

With a battery of that size some sort of fast-charge protocol would have been handy, but sadly you have to make do with regular 2-amp charging. You'll also need to find your own charger, as Alldocube only bundles a USB cable. A full recharge can take upwards of 3.5 hours.

On the subject of streaming, it's worth mentioning that the M8 only supports level 3 Widevine security, so you can only watch Netflix or Amazon Prime video in standard definition. Other streaming services like BBC's iPlayer and YouTube aren't affected and play in full HD.

Dodgy speakers are often a feature of cheap phones and tablets, and the M8 is sadly no exception. The single loudspeaker is certainly loud enough, but it's almost totally lacking in bass. Even if there were two of them the sound would be poor. If you want to use your M8 for media consumption you'll need a decent pair of earphones or a Bluetooth speaker.

The two cameras — 5MP at the back, 2MP at the front — are of equally moderate quality. The similar spec cameras on a 2014-model budget Motorola Moto G do a much better job. Images look universally fuzzy and washed out. But once again, I expected little more from a budget tablet.

One final niggle: there's no ambient light sensor, so you have to change the screen brightness manually to suit the ambient conditions.

Is the M8 a great tablet? No. Is it a good tablet? Yes — especially for the price. It's well made, reasonably powerful and well specified. The dual 4G modem is certainly not to be sniffed at at this price point. If what you want is a fully connected, large-screen second device you can't go wrong. It's just a shame about that loudspeaker.

Alldocube M5S review: An affordable Chinese 10-inch Android slate with 4G
Alldocube has cut corners to reach a very attractive price point for the dual-SIM M5S, but for the most part we're happy with the result.

Is Samsung talking to Apple about a foldable iPad?
Samsung is said to be touting the display tech it's using in the Galaxy Fold to Apple and Google.

Samsung announces Galaxy Tab S5e Android tablet with Bixby integration
The Apple iPad is the default tablet of choice for most people, but if you are looking for one that runs Android then Samsung's are the best. The new Galaxy Tab S5e starts off at an affordable $400 with a launch in the next couple months.

Smartphone market 'a mess' but annual tablet sales are also down
Apple tops the list for most shipped tablets in 2018, while Huawei increased its smartphone penetration during the year.

Best Tablets for 2019 (CNET)
Our editors hand-picked these products based on our tests and reviews.