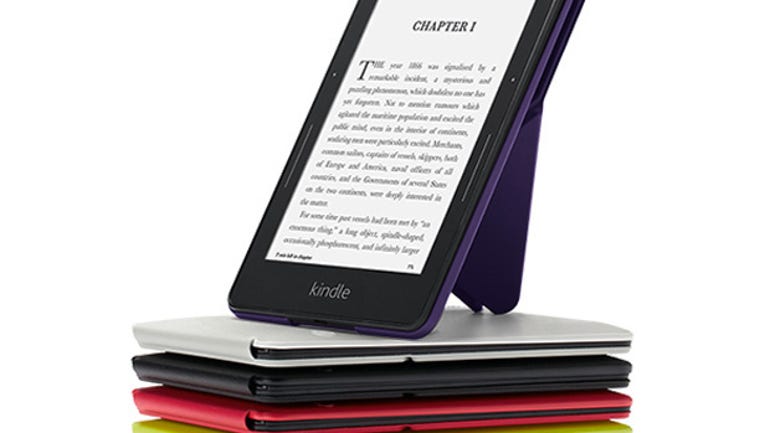 Amazon has had huge success with its Kindle e-readers, the introduction of screen lighting to the 2012 Kindle Paperwhite being a big step forward. Having lived with every UK-available Kindle over the years, as well as with many other e-readers, the Paperwhite became my personal favourite.

The new Kindle Voyage is considerably more expensive than the Paperwhite -- if you go for the wi-fi-plus-3G Voyage, it's nearly four times the price of the entry-level E-Ink Kindle. Indeed, at £229 (inc. VAT) with wi-fi and 3G, it's arguably way too expensive for a device that basically lets you read books.

Amazon sent me the £169 (inc. VAT) wi-fi-only Kindle Voyage, but I assume the mobile broadband works as efficiently as it does in my current Kindle Paperwhite, which I have never had cause to complain about.

The physical design has been refined so that the Kindle Voyage is smaller and considerably lighter than the Paperwhite:

The look and feel at the back ties the Voyage in with Amazon's Fire HDX tablets. It doesn't appeal to me as much as the flat design of the Paperwhite, but it's not really an issue -- after all, how often do you look at the back of your e-reader?

That said, you might have to examine the back more than you'd like, in order to find the power button, which is on the right-hand side -- relocated from its more traditional place on the bottom edge next to the Micro-USB 2.0 charging port. It is recessed, and so can be found by touch alone, but it's still not the best location.

Easy on the eye

Updates to existing features abound. The E-Ink Carta screen is six inches across the diagonal, as in the Paperwhite and the older non-screenlit Kindle, but its resolution is vastly improved from the Paperwhite's 768 by 1,024 pixels (212ppi) to a much more generous 1,080 by 1,430 pixels (300ppi). This has a massive impact on the readability of text, which appears clear, crisp and very easy on the eye.

With the front-lighting at its maximum intensity, the screen's background is closer than ever to the white of a printed page. Both of these factors make reading a more natural experience. A sensor automatically adjusts the light to the ambient lighting conditions, and can even be set to gradually reduce the screen brightness over time as your eyes adjust. This works, although I still found myself making manual adjustments.

Amazon says you should get up to six weeks' use from the battery, based on half an hour's use per day with wireless off and the light setting at 10 -- which is just over a third of its maximum intensity. Although this is less than the eight weeks Amazon claims for the Paperwhite, I never got close to running out of battery life -- even though I may read for an hour or more a day. It's no problem to plug in any available Micro-USB 2.0 charging cable for a quick power boost.

The screen, which sits flush to the bezel, is touch-sensitive and I found this made it easier to make accidental taps than on the Paperwhite, whose slightly indented screen forms a tactile barrier -- for me at least.

You need to touch the screen to access a lot of the functions, but there are also pressure-sensitive page-turn strips to its left and right. I found these worked well if I left a finger resting on the strip and applied pressure when a page turn was needed. However, I don't always hold my Kindle with a digit in the right place, and the system, which Amazon calls PagePress, feels a bit like a throwback to older mechanical page-turn buttons; the lines that denote the pressure-sensitive areas also disturb the clean look of the bezel. There's haptic feedback too, which I found intrusive. Thankfully you can disable this feedback, set the pressure level required and even disable the whole system.

PagePress will please some people and irritate others, but overall the Amazon Voyage is mightily impressive from a technical standpoint. You're unlikely to overstep the 4GB of internal storage, but if you do then the Kindle cloud storage service is available to take up the slack.

The problem, really, is whether people will be prepared to pay quite such a hefty price for the features on offer. The Kindle Paperwhite might not be as easy to read, or have the advanced lighting features, but it's fit for purpose and the new features in the Voyage aren't revolutionary. As well as comparing the cost of the Paperwhite, consider that Google's Nexus 7, soon to get Android Lollipop, will cost you £239; or if you're strapped for cash there are options like the Samsung Galaxy Tab 3 Lite 7.0 at around £125 and the Asus MeMO Pad 7 at around £120.