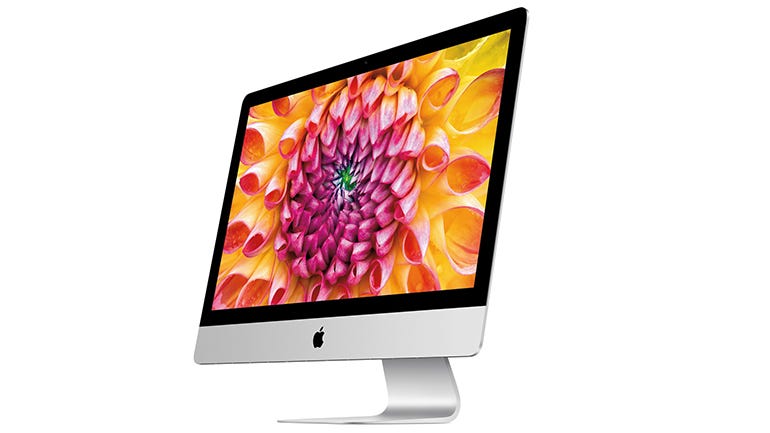 Apple stole a march on its rivals last year when it launched a new version of the 27-inch iMac equipped with a state-of-the-art 5K display that was ideal for professional-level graphics, photography and video-editing work. That was barely a year ago, but Apple has already come up with a significant update that not only provides a new sixth-generation Skylake processor from Intel, but also manages to raise the bar on display quality yet again.

Like its predecessor, the late-2015 version of the 27-inch iMac with Retina 5K Display boasts an elegant, slimline display panel with a remarkable 5,120-by-2,880-pixel resolution. The logic behind that particular figure is that the 5K resolution allows you to display a 4K video image at full size, while still providing a significant amount of additional space on-screen for the tools and palettes of video-editing software such as Adobe's Premiere Pro or Apple's own Final Cut Pro.

Regardless of the particular applications you plan to use, the image quality delivered by the 5K display is quite outstanding. It' s clearly brighter and more colourful than the display on our three-year old office iMac, and even simple text in word-processor documents looks clearer and sharper. But while last year's Retina 5K display supported the same sRGB colour-space as most conventional monitors, this new model supports a colour-space known as DCI-P3, which is used in many professional dSLR cameras and video cameras. Put simply, the P3 technology allows the iMac to display a 25 percent wider range of colours -- including the precise red of a London bus, which according to Apple is not properly displayed by a conventional sRGB monitor.

Of course, that level of colour reproduction will be overkill for most users, and if you simply need a large display for presentations or simple design work then there are many more affordable alternatives available. However, Apple is clearly targeting the professional video and photography markets with the 27-inch iMac, and there are few rival products from PC manufacturers that provide a comparable graphics workstation for less than £2,000.

Apple's high prices have often been cited as a barrier to the adoption of the Mac in the business market but, unusually for Apple, the combination of 5K display and strong graphics performance means that the 27-inch iMac with Retina 5K Display is genuinely good value for money. This year's update continues that trend by driving down the entry-level price point for the 5K model even further.

Apple has now updated all three 27-inch models, and even the entry-level configuration now includes a 5K display while remaining at the same £1,449 price point. That price also includes Intel's new quad-core Skylake Core i5 processor running at 3.2GHz (3.6GHz with TurboBoost), along with 8GB of memory, a 1TB hard drive and a Radeon R9 M380 graphics card. By contrast, Dell's 27-inch standalone 5K monitor (model UP2715K) is currently selling online for around £1,500 (£1,250 ex. VAT) which makes the 27-inch iMac with Retina 5K Display look like something of a bargain. If you genuinely need a 5K display for professional applications such as photo- or video-editing then -- just for once -- Apple really does provide better value for money than most of its Windows PC rivals.

The 27-inch iMac With Retina 5K Display also provides strong performance for video editing and other graphics-intensive tasks. We tested the mid-range model, which adds a 1TB hybrid Fusion drive and Radeon R9 M390 for a total price of £1,599 (£1,332.50 ex. VAT).

The Skylake update provides only a modest increase in processor performance, with this 3.2GHz chip achieving a Geekbench 3 score of 12,120 for multi-core performance, compared to 11,800 for its 3.3GHz Haswell predecessor. The updated GPU also provides a small speedbump -- approximately 10 percent -- to reach 98.4fps for OpenGL rendering in Cinebench.

And, of course, upgradeability remains the iMac's weak point. Memory is accessible via a small panel at the back of the display, and a pair of Thunderbolt 2.0 ports provides the option of connecting high-performance storage devices. However, the lack of internal expansion slots means that the GPU and internal storage are completely untouchable. Apple's own build-to-order upgrades also remain very expensive -- including £160 (£133.33 ex. VAT) for just an additional 8GB of memory, or £200 (£166.66 ex. VAT) to step up to a Radeon R9 M395 graphics card.

It's a shame that the original 27-inch iMac with 2,560 by 1,440 display has been completely discontinued, as that provided a stylish and compact desktop computer suitable for general business use. By contrast, the current 27-inch iMac with Retina 5K Display is clearly more of a niche product that will appeal primarily to professional photographers and video editors. Even so, that's still a profitable niche market -- and a growing one as 4K video becomes more widespread. The iMac's competitive pricing and outstanding 5K display will make it a very tempting option for many creative professionals.

Apple's recent round of price rises -- courtesy of Brexit and the plummeting pound -- have seen the top-of-the-range iMac increase overnight from £1,849 to £2,249 (inc. VAT, or £1,874 ex. VAT) without so much as even a modest speed-bump to sweeten the pill. But, to be fair, a standalone 5K monitor such as Dell's UP2715K still weighs in at around £900 on its own, which means that the 27-inch iMac with Retina 5K Display is still relatively good value for money.

Unsurprisingly, the 27-inch iMac is very much intended as a workstation for graphics and video work, and Apple's decision to go slightly over the top with that 5K display -- at 5,120-by-2,880-pixel (218ppi) resolution -- means that you can view 4K video (3,840 x 2,160 pixels) at full size while still having some extra room available on-screen for the palettes and menus of editing tools such as Adobe Premiere or Apple's own Final Cut Pro. The sheer size of the 27-inch display also gives the iMac an advantage over many of its high-end AIO rivals, which often seem to opt for smaller 24-inch displays on the assumption that you'll be buying a separate, external monitor anyway. Last year's update also added support for the DCI-P3 colour standard that's widely used for high-end photo and video editing, so there's no doubt that Apple sees 4K video-editing as a key market for the iMac.

This top-of-the-range model is based on a quad-core Intel Core i5-6600 running at 3.3GHz (up to 3.9GHz with TurboBoost), along with 8GB of RAM, a 2TB Fusion drive (hybrid SSD/HDD), and an AMD Radeon R9 M395 GPU with 2GB of dedicated video RAM. Apple's habit of cutting corners is evident in the modest RAM and VRAM that the iMac offers but, thankfully, the iMac does still deliver the sort of graphics performance required for 4K video editing and other professional applications.

When running the Geekbench 4 test suite, the iMac's Core i5-6600 delivers strong scores of 4,897 and 13,387 respectively for single- and multi-processor performance. That's backed up by equally strong graphics performance, with the Radeon R9 M395 hitting 94.5 frames per second (fps) in the Cinebench R15 OpenGL test. Those scores might not be in the CAD workstation league (Apple also has its own high-end Mac Pro on offer for that audience), but the iMac is certainly up to the task of handling 4K video editing.

The only minor oddity here is the performance of Apple's hybrid Fusion drive. The iMac can't run the Windows-based ATTO disk benchmark we use elsewhere, but the Aja System Test Lite benchmark recorded a read speed of 1,739MB/s, but only 668MB/s when writing to the Fusion drive. Those speeds still outdo a conventional hard drive, but some users might well prefer to pay an extra £180 (inc. VAT, or £150 ex. VAT) to swap the Fusion drive for 512GB of SSD-only storage.

And, of course, upgradeability remains the iMac's Achilles Heel -- as, to be fair, is the case with many rival AIO systems too. The iMac's elegant slimline design may be pleasing to the eye, but it leaves precious little scope for user upgrades -- or even simple repairs. It's possible to upgrade the memory via the small removable panel on the back of the iMac, but there are no drive bays or upgrade slots available at all. That's a real weakness in a desktop system designed for professional users, especially given the high prices that Apple charges for its BTO upgrades at the time of purchase. It's not particularly well-designed from an ergonomic point of view either. You can't adjust the height of the display at all, and all the ports and interfaces are annoyingly hard to reach around the back of the unit, which means you have to stand up and physically rotate the entire unit in order to plug in a simple USB memory stick or SD card.

And, ironically, it was Apple that co-developed the high-speed Thunderbolt interface with Intel, yet this 2015 edition of the iMac is still equipped with a pair of Thunderbolt 2.0 ports, while some of its PC rivals are already using Thunderbolt 3.0.

Despite Apple's reputation for high prices, the 27-inch iMac with 5K Retina Display is an attractive all-in-one desktop for video-editing and graphics work. It's not quite in the high-end workstation league, but the inclusion of the 5K Retina display gives it an edge over most of its AIO rivals, and only the lack of user-upgrade options mars this otherwise very impressive system.