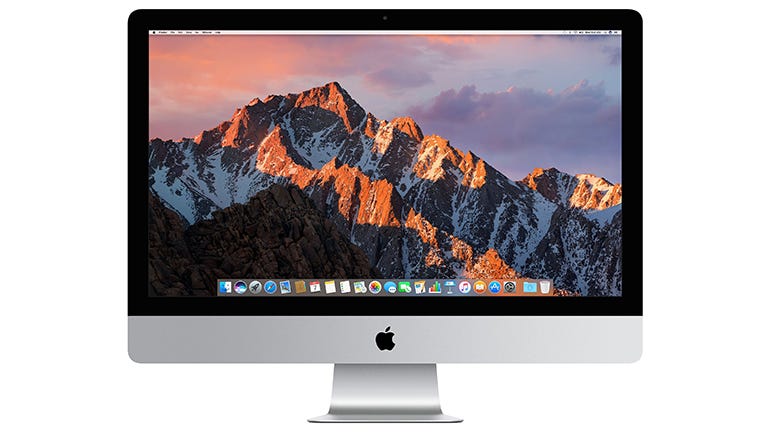 When the iMac was first launched, it was very much intended as an affordable home computer -- and, indeed, was often derided for its cute, candy-coloured design. In recent years, though, the iMac has gradually evolved into a professional-level graphics workstation, and that status has now been confirmed with Apple's recent announcement of the forthcoming iMac Pro.

However, the iMac Pro isn't due until December, and Apple's recent admission that it got things wrong with the cylindrical design of the Mac Pro means that the company now has a gaping hole in its desktop line-up. And so, rather than simply opting for a mid-year Kaby Lake speed-bump, Apple has given the iMac a more thorough make-over, and effectively promoted it to the role of flagship desktop system for creative and professional users.

Superficially, the 2017 version of the 27-inch iMac doesn't look all that different. On the inside, though, virtually all the main components have been updated: Faster solid-state drives, up to 64GB of DDR4 RAM, more powerful GPUs, faster Thunderbolt 3 connectivity, and, of course, Intel's seventh-generation Kaby Lake processors. Even the keyboard has been updated for professional users, with the addition of a numeric keypad and larger set of navigation keys.

Unfortunately, the new keyboard is an optional extra costing £30 ($30), rather than a standard feature. Thankfully, though, the updated 2017 iMac does provide better value for money, and helps to compensate for the Brexit-related price bump that added around 20 percent across Apple's entire UK product range toward the end of last year.

There's been a big graphics upgrade, too, in a belated attempt to get a foot in the door with the VR crowd. So, as well as increasing the brightness of the iMac's 5K Retina Display to 500 nits (matching that of the MacBook Pro), Apple has also opted for a more powerful Radeon Pro 570 GPU with 4GB of VRAM.

It's no surprise to see a speed-bump from the new Intel processor, but Apple's recognition of the need to woo the VR community with a substantial graphics upgrade means that this year's entry-level model now provides the same level of performance as the previous top-of-the-range configuration from 2016.

Geekbench 4.1 reports CPU scores of 4,845 and 14,000 for single- and multi-core performance respectively, while the 2017 iMac also hits 99.5fps per second for graphics performance under Cinebench R15. You'd have had to pay £2,249 for that sort of performance last year -- 4,897 and 13,387 for Geekbench and 94.5fps for Cinebench to be precise -- so this year's iMac certainly provides better value for money than its predecessors.

In contrast, a rival all-in-one Windows system such as Dell's XPS 27 starts at £1,699 with a 4K display, but only has a 2.7GHz Skylake processor, a conventional 1TB hard drive, and relies on integrated graphics. We're still irritated by the iMac's standard 8GB of memory, which is inadequate for a professional-level system and clearly intended to lure you into purchasing some of Apple's expensive build-to-order options. And, as ever, user upgrades are limited to just the memory alone -- although, surprisingly, there are reports that the new 21.5-inch version of the iMac actually allows CPU upgrades for those brave enough to dismantle the all-in-one display panel. But limited upgradeability is a weakness shared by most AIO systems, and the 27-inch iMac remains a rare example of an Apple product that can actually outgun its Windows PC rivals in terms of both performance and value for money.

Necessity, as the saying goes, is the mother of invention. With the Mac Pro range effectively put on hold, Apple has acknowledged that it needed to give the iMac a substantial performance boost in order to provide the performance that its professional and creative users need -- especially if it hopes to compete in emerging fields such as VR. Some iMac owners may be tempted to wait for the forthcoming iMac Pro, but this 2017 update proves that the veteran iMac is still alive and kicking.