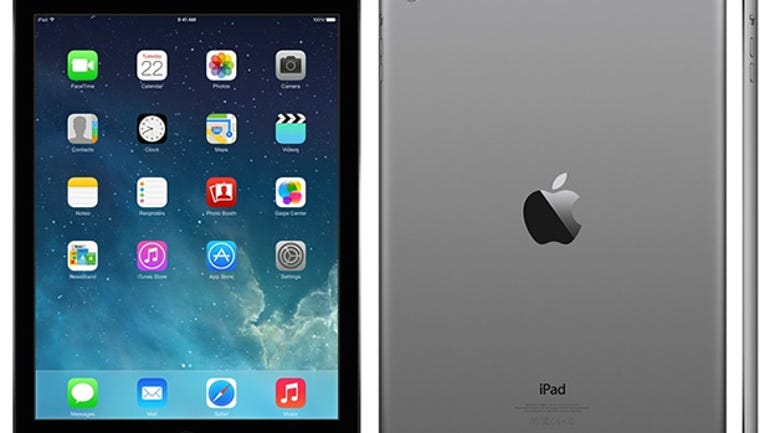 As far as design goes, the name says it all: the new iPad Air, its name echoing the MacBook line, is significantly thinner and lighter than the previous-generation iPad 4. Specifically, it's 20 percent thinner (7.5mm versus 9.4mm) and 28 percent lighter (469g versus 652g for wi-fi only, 478g versus 662g for wi-fi-plus-LTE). It's also 8.9 percent slimmer (169.5mm versus 186mm), thanks to thinner bezels flanking the 9.7in. Retina screen, which retains its 2,048-by-1,536-pixel resolution for an unchanged pixel density of 264ppi. Because you're likely to have your thumb on the screen when holding the narrow-bezeled iPad Air in portrait mode, a new algorithm distinguishes between this and an intentional touchscreen interaction.

Apple was able to slim down the iPad Air for two main reasons, according to analysts IHS iSuppli: the display itself is some 19 percent thinner (1.8mm versus 2.23mm), while the battery — always a significant proportion of a tablet's bulk and weight — is smaller (32.9Wh versus 43Wh in the previous generation). According to iSuppli, Apple managed to cut the battery capacity, despite the use of the more powerful 64-bit A7 processor, thanks to a reduction in the number of LEDs for screen backlighting (36 versus 84). Image quality, incidentally, does not seem to suffer from the reduced LED count.

Despite its new svelte dimensions, lighter weight and more rounded edges, the iPad Air, which comes in silver and 'space' grey, still looks and feels very, well, iPad-like. That's to say, it feels like a classy, well-built premium product. One feature that Apple didn't carry over from the new flagship iPhone 5s smartphone, which uses an otherwise almost identical hardware platform, is the fingerprint-sensing Touch ID home button: the iPad Air has a regular Home button, and still requires you to type in a passcode when you unlock the device, and when you purchase apps, music, movies and books. This is a disappointment, especially if you also have an iPhone 5s and have become used to the convenience of the biometric home button.

Other buttons and connectors are easy to find: audio-out jack and on/off-sleep/wake on the top (in portrait mode), flanking the dual microphones; silent/screen rotation lock and volume buttons top right; and the Lightning connector on the bottom, flanked by a pair of stereo speakers. The latter placement means that if you're watching a movie, for example, in landscape mode, the sound will come from one side, which isn't ideal. Most of the time, though, you'll either be using headphones or external speakers.

New Smart Covers and Smart Cases are available for the iPad Air, costing £35 (inc. VAT, £29.17 ex. VAT) and £65 (inc. VAT, £54.17 ex. VAT) respectively. Apple supplied us with a vivid green Smart Cover and a brown leather Smart Case, and we rapidly settled on the latter as the preferable option.

Apart from the design changes described above, the main advance in the iPad Air is its use of the 64-bit A7 processor and M7 motion coprocessor platform, as also seen in the iPhone 5s. The A7 is a dual-core ARMv8-A SoC running at 1.4GHz (100MHz faster than the 1.3GHz iPhone 5s), with a GPU that supports OpenGL ES v3.0. According to Apple, the A7 delivers twice the processing and graphics performance of the A6X chip in the previous-generation iPad 4. As in the iPhone 5s, the A7 is supported by 1GB of RAM and a low-power M7 motion coprocessor that handles sensor data from the accelerometer, gyroscope and compass.

Dual-band 802.11n wi-fi performance is improved with the addition of a second antenna and MIMO (multiple input/multiple output) technology, doubling the theoretical throughput from 150Mbps to 300Mbps. However, Apple has yet to embrace the latest 802.11ac wi-fi standard, as seen in Samsung's Galaxy Note 10.1 (2014 Edition). If you specify a mobile broadband model, you'll find increased support for LTE frequency bands (1, 2, 3, 4, 5, 7, 8, 13, 17, 18, 19, 20, 25, 26): we used our LTE-equipped review unit successfully with a nano-SIM from O2, commuting between London and Bedfordshire.

The front-facing 1.2-megapixel FaceTime camera delivers better low-light performance thanks to a larger sensor with bigger pixels. The videoconferencing experience is further enhanced by the addition of a second microphone that allows for background noise cancellation. The rear-facing iSight camera is a 5-megapixel unit as on the iPhone 5s, but doesn't support the latter's burst mode or slow-motion video capture capability.

As far as software is concerned, the iPad Air runs the latest iOS 7 version, with its 'flat' look, new Control Center, Air Drop functionality and more. Apple's own productivity (Pages, Numbers and Keynote) and creativity (iPhoto, iMovie and GarageBand) apps are now both free and recompiled for the new 64-bit platform. Third-party developers are also busy retooling their apps, with Autodesk recently claiming that AutoCAD 360 was the first professional app to be optimised for the iPad Air and iPad mini with Retina display.

How much faster is the 64-bit iPad Air than its 32-bit iPad 4 predecessor? Apple claims that the iPad Air delivers twice the CPU performance of the iPad 4, and this is borne out by the GeekBench 3 test, which shows a near-2x performance boost on both the single-core and multi-core tests (1.91x and 1.9x respectively):

Note that the iPhone 5s delivers slightly lower GeekBench 3 scores than the iPad Air because it runs at 1.3GHz rather than 1.4GHz.

Testers have been puzzled by the parity between the iPad Air/iPhone 5s and iPad 4/iPhone 5 in the largely CPU-bound physics test, which prompted Futuremark to investigate further. It turns out that the A7 processor's performance in this test is limited by the way complex data structures are stored in memory: non-sequential data structures with memory dependencies, as used in the Ice Storm physics test, mean that the A7 is no faster than the iPad 4's A6X chip or the iPhone 5's A6. When Futuremark retested the A7-powered iPhone 5s with a custom build of 3DMark Unlimited using optimised data structures, the result was a 17 percent performance improvement over the A6-powered iPhone 5.

We estimated the iPad Air's battery life by measuring the power consumption of the fully-charged device under idle and load conditions (running Microsoft's Fishbowl HTML5 test) at three different screen brightness levels (25%, 50% and 100%). Dividing the resulting average wattages into the lithium-polymer battery's 32.9Wh capacity gives a figure for the expected battery life (Wh/W=h).

The iPad Air is thinner, slimmer, lighter and faster than its predecessor for the same 10-hour battery life. The iOS ecosystem also provides plenty of software choice — Apple currently claims 475,000 iPad apps on its App Store, although optimisation for the new 64-bit platform will take time. Having said that, you'll have to pay handsomely for all this Apple goodness — especially if you add the sort of accessories that business users will require in order to make the tablet versatile enough to do real work on the move.